Editor’s Note: TrainingIndustry.com has partnered with SHRM to bring you relevant articles on key topics and strategies.

When it comes to parents and the workplace, there are promises and then there’s reality.

That was certainly the case for Elena Thormahlen, a former sales manager at a large Florida-based company. “This company was very proud to be employee-friendly, with attractive benefits for parents,” she says. “But actually using the benefits was a whole different thing.”

Working as one of many customer relationship managers, Thormahlen went through a pregnancy and birth and returned to her position with no issues. In time, she was promoted to a sales management position. About three months into her new role, she became pregnant again.

That’s when her problems started.

“I was in a position of dealing directly with the executive suite, but there was only one person in this role and this pregnancy was treated entirely differently,” Thormahlen says. “I was terminated just a couple of months into my pregnancy, while at a doctor’s office, for missing too much work [due to medical appointments].” She says her employer never offered to provide her with time off for doctor visits under the Family and Medical Leave Act (FMLA).

Thormahlen was left in the lurch at a very vulnerable time.

“Although I was able to get interviews for new positions,” she says, “showing up to job interviews six months pregnant did not get me a lot of callbacks.

“I was left high and dry,” she recalls, without a job and without health insurance, which she could not afford. “I had to get unemployment, food stamps, Women Infant & Children [WIC benefits] and Medicaid. It was a genuine reality check about just how vulnerable a pregnant employee really is.”

Thormahlen eventually found a new job as vice president of business development at Meridian Insurance Services in Nevada. “I never imagined as a salaried and decently paid employee that I’d be in the position to be sitting in the welfare office after just a few months,” she says, “but that’s where I ended up. It’s an experience I won’t soon forget.” 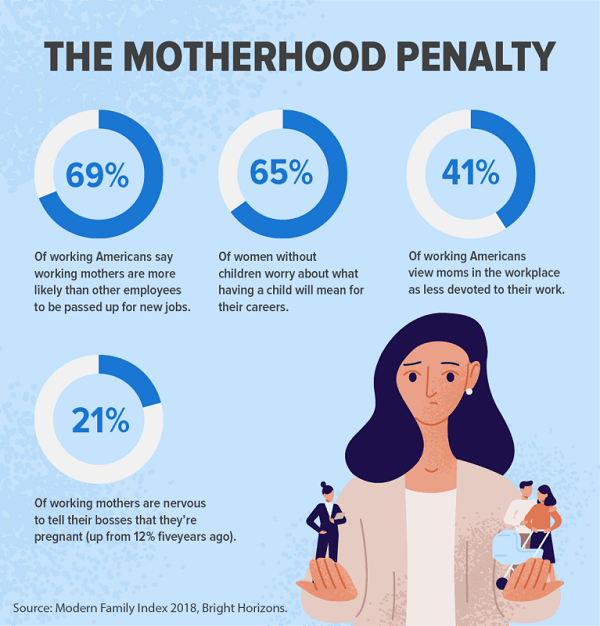 Many parents, especially women, face career challenges when they exercise their right to parental leave benefits. In some companies, their advancement prospects and even job security may be at risk.

What child care provider Bright Horizons calls the “motherhood penalty” is still very much alive in corporate America and across the globe. Seventy-two percent of working parents in the U.S. agree that women are penalized in their careers for starting families. Men aren’t penalized as severely, but they can still face backlash.

How is that scenario possible in this day and age?

“As much as it pains me to say it, I think that some employers do have an unspoken issue with employees taking parental leave, and that’s very problematic,” says Stephen Hart, chief executive officer at Cardswitcher, a Glasgow, Scotland-based company. He says leaders at some businesses are worried about the perceived cost of parental leave, including the time and energy needed to find a temporary replacement for the person on leave.

In some companies, parents advancement prospects and even job security may be at risk.

Of course, it’s not easy to make up for the absence of a staffer who must take maternity or paternity leave, but it’s what companies need to do.

In the short term, an employee’s pregnancy will likely impede her ability to do the job, “but this is why maternity leave exists,” says Matt Dunne, hiring manager at Africa Travel in Capetown, South Africa. “It’s fair to hire someone to provide temporary cover while the permanent employee is away on maternity leave, but not to replace them altogether, as this would be punishing them for making a fair and unrelated personal decision.”

Additionally, whether an individual is a parent or not should play no role in hiring and promotions. Such decisions should instead be based purely on the individual’s skills, abilities and credentials, Dunne says.

“Clearly, an employee should never feel like their career is stopping them from starting a family,” he adds. “The fact is that personal circumstances, such as having a child, usually don’t affect an employee’s ability to do the job.”

By providing parents with the time off they need to care for their children, employers convey a meaningful message. “If you truly value your employees as human beings and want to help them grow as people over the long term at your company, then you’ll give them the necessary time off to celebrate one of the most important moments in life―the birth of a new child,” Hart says.

If employers turn their backs on parents, they’ll have to live with the consequences. “Don’t be surprised when employees get demotivated, become inefficient and move elsewhere,” Hart says.

There are encouraging signs that more U.S. companies understand the importance of time off for parents. In recent years, an increasing number of employers began offering maternity, paternity and other parental leave, according to the Society for Human Resource Management. The percentage of companies offering paid maternity leave, for example, increased from 26 percent in 2016 to 35 percent in 2018.

But in many cases, staffers are too scared to request time off, even if a policy is in place, Dunne says. According to the Bright Horizons survey, 1 out of 5 working mothers is nervous to tell her boss that she’s pregnant.

This fear comes from the workplace culture, Dunne says. He warns against a sterile, impersonal environment and encourages HR professionals to be welcoming and understanding so that staff members feel they can walk in and discuss their situations.

“By creating an approachable, friendly atmosphere, companies remove the unnecessarily formal processes and minimize the hassle for those who simply need the time to take care of themselves and their family,” Dunne says.

Getting It Right Early On

Some companies try to get ahead of the parental leave issue by establishing firm but generous policies on day one of an employee’s tenure.

That’s the case at Wilmington, N.C.-based N2 Publishing, a producer of neighborhood publications. HR manager Gina Foshage says the company was founded in 2004 with a straightforward mission: honor God, strengthen the family and create financial wealth for everyone involved.

“N2 Publishing was founded with a mission that includes strengthening the family, so right from the beginning, we knew we wanted to be a family-friendly workplace,” she says. “To us, that means two weeks of paid paternity leave, six weeks of paid maternity leave and, of course, FMLA-protected leave to those who qualify.” (For those who don’t, N2 typically offers at least 12 weeks off, which is unpaid once paid time off is exhausted.)

N2 also has a partnership with a members-only pediatrician. Under the arrangement, N2 pays the membership fee for employees with kids under 18. “Our parents only pay a small fee for certain medications and materials,” Foshage explains

Yet it’s the day-to-day policy details that matter most at N2.

“Being truly family-friendly is more about the culture you create around the people in your organization who are choosing to have families than it is about the benefits that come with it,” Foshage notes.

“Large companies with unlimited paid time off may also have a culture that brags about not taking advantage of time off,” she says. “But at N2, we send out reminder e-mails to our team members to take their paid time off each year. We also have a mandatory two-week holiday break around the holidays, where the company shuts down so our team members can spend uninterrupted time with their families.” 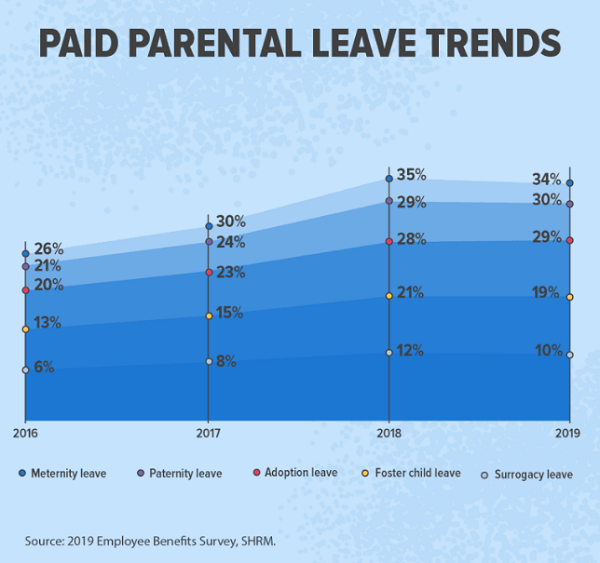 By providing parents with the time off they need to care for their children, employers convey a meaningful message.

Conventional wisdom in the workplace is that childless staffers have more time and energy to devote to the corporate cause and that this makes them more valuable.

But is that really the case? Not necessarily.

“If companies are passing up new parents for promotions and workplace opportunities, they’re being incredibly shortsighted,” says Emma Brudner, director of people operations at Lola.com, a corporate travel company based in Boston.

Brudner believes that being the parent of a young child means you have to become extremely efficient, including at work.

“Want time management tips? Take a mom or dad of a baby out to lunch, and I guarantee you’ll be amazed,” she says. “Parents also make some of the most effective and creative managers within an organization. Parenthood gives you a heaping dose of empathy and a totally new perspective on approaching challenges that don’t just get left at home.”

Brudner walks the walk on parental realities in the workplace.

“I accepted a new job, which represented a complete career shift, when my son was 4 months old,” she says. “The only way I was brave enough to take the plunge was that I have had several working moms as role models showing me it was possible and supporting me every step of the way.”

Employers that impose a parent penalty are not just failing to take full advantage of the talent in their organizations, Brudner says. They’re also stifling future generations of workers in their companies that don’t have those examples to look to.

“Make no mistake,” she says. “Talent will walk out the door and head to your competitor.” 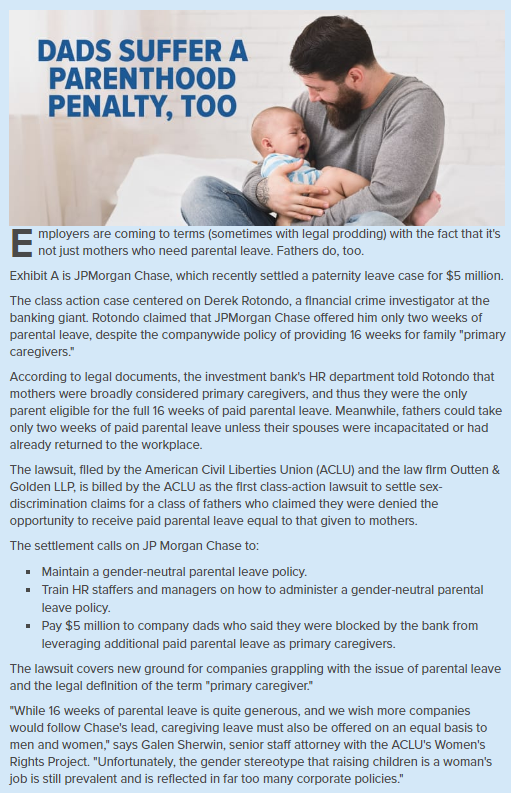 Copyright 2019, SHRM. This article is reprinted from https://www.shrm.org with permission from SHRM. All rights reserved.

Employers that impose a parent penalty are failing to take full advantage of the talent in their organizations.