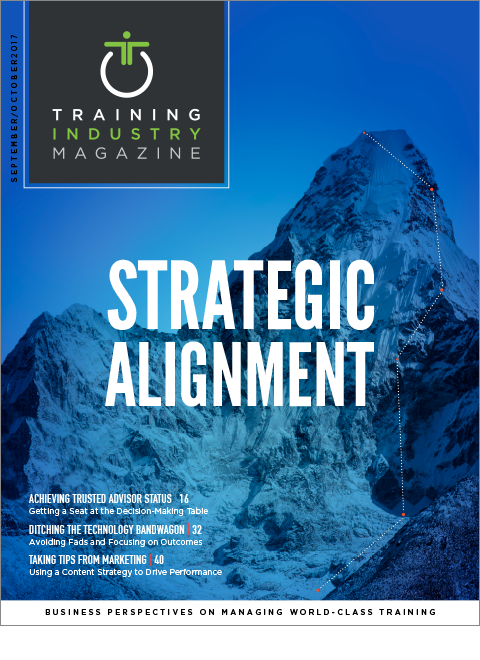 View in Magazine
The search for efficiency in training is not over.

Making sure you have the right people to train may seem like a blindingly obvious statement. Yet it is not unusual to find a disconnect between the way that recruitment is done and the learning function. All too often learning professionals are tasked with training or developing people who are not in the right job. The Ports of Auckland recognized this issue and chose to tackle this head on; this is their story.

Ports of Auckland is New Zealand’s largest major port, and through its network of freight hubs, it facilitates the supply chain throughout New Zealand. The Ports undertook a major strategic review of their training practices, but not by following traditional assessment and evaluation practices. In doing so, they dramatically slashed the training hours needed to build competent crane drivers and in the process shaved almost half a million dollars off the overall cost of training in the first six months. Three years in, it is estimated savings could have been as high as $3 million.

One of the most expensive training activities is the training of portainer crane operators. Portainer cranes are specifically designed to load containers onto ships. Training a new crane operator is incredibly expensive and takes up valuable time of the trainer and trainee; every hour of on-the-job training means that a working crane is operating well below its capacity. This learning continues for a period after training, significantly impacting both profitability and profit. Four years ago, based on these factors, the cost of training was on average approximately $526 per hour.

As part of the efficiency review, it was noticed that the time it took to train crane operators varied considerably. Some could train to full competency in 210 hours of training, others might take as much as 352 hours or more. This is equated to a cost difference of more than $70,000 between the shortest and the longest training time. And so, a Lean Six Sigma Project was born, with the goal to “reduce variation in the hours taken to train crane operators to operational status, to reduce training cost and improve resource utilisation without impacting quality.”

Lean Six Sigma is an efficiency methodology designed to eliminate waste and reduce variability using data to identify root causes and collaboration to design effective solutions. This methodology was chosen to focus on the variability in the training times.

The analysis of data was substantial. A project team of trainers, crane specialists and Six Sigma trained business managers examined a range of variables including the type of ships being serviced during training; the weather; the age and make of the crane; the instructor; the frequency of training sessions; and the time of day. Yet, despite substantial statistical analysis, none of these variables, nor the combination of variables, showed a correlation that was statistically significant.

So, the team changed tactics and started interviewing the trainers about their experiences with trainees. Suddenly, an interesting factor took center stage. Every trainer said that they could predict reasonably accurately when a new trainee started, whether they would take a longer or a shorter time to train. So, the project team focussed on trying to identify what factors they were using for their hypothesis.

At first the trainers found it difficult to articulate how they made these predictions. The variables used were processed subconsciously. But with careful questioning, the critical factors slowly began to emerge. These were tested and found to have a significant correlation to training times. Two in particular seemed to account for the majority of the training time differential. The first variable was the ability to judge, on first attempt, how high off the ground a container was. The second was the ability to stop a container from swinging excessively when moved out over a ship.

These two variables were then defined as specific skills and an “aptitude” test was devised to test for them. The trainees would be given a specific task to do and measures were put in place to assess performance against a set of pre-determined criteria.

For example, to test depth perception, a potential trainee was asked to lower a container as close to the ground as possible without actually touching the ground. This was repeated several times.  Trainees were not expected to be perfect; achieving this needs practice. But if they met the threshold of lowering the container to no more than 10 centimeters above the ground without hitting the ground, they passed the first test. To put this into perspective, trainees were sitting 48 meters above the ground in a crane cab with a glass bottom. A good head for heights was therefore also tested!

To test for swing control, the instructor deliberately set up the container under the crane to oscillate, as might happen when a container is lifted over a ship. An experienced crane operator can land the container on the ship on the first swing. Trainees were asked to successfully stop the container from swinging within three swings. If they could do this, then they passed the second test. If they passed both tests, then they were cleared for training.

A pilot was run with two groups from the next recruitment round. Half of those recruited were given the aptitude test and the other half were not. Everything else in the recruitment process was the same, but it did not take long to see the difference in training performance.

Before the Lean Six Sigma Project initiative, the average crane training hours per trainee was 250.4 hours equating to a cost of $131,368 per person. During the first intake using aptitude testing, the average crane training hours per trainee reduced to 187.3 hours, lowering the cost to $94,219 per person. Following a few revisions to refine the testing, and during the second intake, the training time reduced again to an average of 120.5 hours, costing $70,941 per person.

After the first intake, total savings across the trainee group that passed the aptitude test was $185,745. This was not even closely matched by the control group. After the second intake (where all trainees had passed the aptitude test), a further saving of $302,000 was made, making the total amount of savings $487,745. Over the first year this trend continued with estimated savings of over $1 million, which means as much as $3 million may have been saved over the following three years.

The search for efficiency in training is not over. Ports of Auckland have further cut the cost of training using a crane simulator. Crane operators are trained initially by an instructor on the simulator, reducing the need to use a crane in an operational environment when the trainee is at their least productive. Virtual reality is also being explored to see if it can further accelerate training.

The lesson is for trainers to be more proactive in working alongside HR and for managers to develop a recruitment process where aptitude is considered. A person does not need to arrive with all the requisite skills, but consideration must be given to whether those skills can be easily acquired.

Diane Edwards is the general manager people systems and technology at Ports of Auckland, New Zealand.