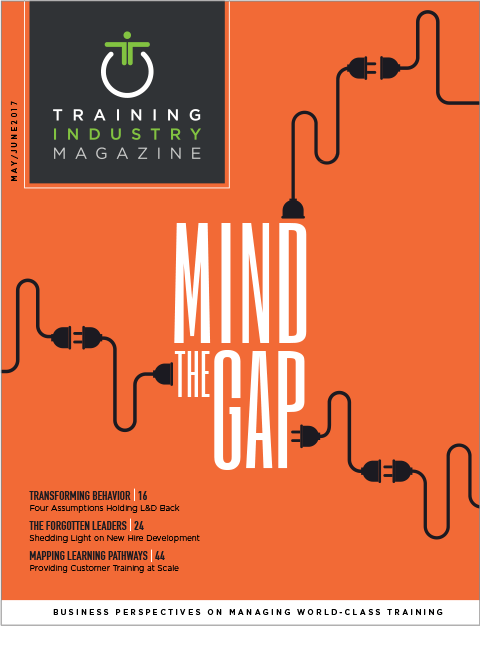 View in Magazine
It's time to rethink leadership training strategies, and expand the very notion of a leader.

Leadership training for managers and executives dominates the industry while new hires are almost entirely ignored. A carryover from the Industrial Age, this leader-manager focus ignores an essential need for innovative thinking at all levels of an organization. In the Information Age and beyond, the very idea of a leader should be divorced from a manager in favor of developing innovative thinking from every employee, regardless of their tenure. Since innovation is now the primary driver of growth, it is time to rethink leadership training strategies, and expand the very notion of a leader.

The Top-Down Strategy is Outdated

In a January 2016 posting, HRmanagement.com claimed that “Recruiting innovators will be a truly important hiring trend in 2016.” Supporting that idea, Soren Kaplan, the founder of Innovation Point, said “The last thing you want is a key player on your team paralyzed by uncertainty and fear of risk-taking.” Harvard University’s Division of Continuing Education offers “Strategies for Leading Successful Change Initiatives” with a program that highlights “profiling and identifying change agents.”

All these expert training resources agree that hiring and training for innovative change is important, but their focus is usually on key players in the hierarchy. Onboarding young professionals at the start of their careers as leader-innovators can create a company-wide culture that embraces creative change from the bottom-up.

The Evolution: From Leader-Manager to Leader-Innovator

Delaying leadership training until the candidate reaches a management position is short-sighted in what we might call an advancing Innovation Age. Just as the Information Age transformed Industrial Age businesses to recognize the power of big data, Innovation Age companies must innovate to thrive. They need to recognize that every employee has the potential to offer creative solutions, and thereby to lead, regardless their title or length of service. To gain such an advantage, the notion of training leader-managers should give way to training leader-innovators. To do so, more attention needs to be paid to these concepts:

Paul offers two aspects that he considers crucial. The first is that critical thinking isn’t just thinking, but thinking that entails self-improvement. In other words, what can I learn while I am thinking? The second is that critical thinking must involve reason, not simply assertion. In other words, the critical thinker seeks out real evidence from which they draw reasonable conclusions. From Paul’s point of view, these thinking objectives are lifelong challenges not readily mastered, but suggests we view them as a hub around which all other challenges are studied. It makes sense then that the earlier someone starts, the better.

Understanding the importance of emotional intelligence in developing leader-innovators begins with an examination of why new hires tend to fail, and adjusting onboarding techniques accordingly. In a June 2015 study, Leadership IQ addressed the issue of why new hires fail. The study found that only 11 percent of new hire failures were due to a lack of technical competence, while:

In sum, 81 percent of new hire failures were due to deficiencies in what we might view broadly as emotional intelligence, while only 11 percent failed due to technical incompetence.

In his “What Makes a Leader?” essay for the Harvard Business Review, Daniel Goleman argues that IQ and technical proficiency are merely “threshold capabilities” for leadership. While he warns that developing one’s emotional intelligence is a lifelong challenge, Goleman offers these hallmarks as the keys for leadership:

The practical application in training young professionals for emotional intelligence (EI) should include a self-assessment tool that asks the candidates to rate themselves on the several elements of EI. Examples might include, “I’m always calm under pressure,” “I manage everyday stress with relative ease,” and “I’m good at building rapport with my boss, colleagues and customers.” With a simple one to five personal rating on each of several elements, the candidate will quickly recognize their EI strengths and weaknesses, and have a model for continuous improvement as a leader-innovator.

To appreciate the leadership principles important in developing leader-innovators requires an understanding for typical leadership attitudes among business executives. In an October 2015 study, the Center for Creative Leadership asked the question “Are Leaders Born or Made?” The study divided responses into those CEOs who believe that leaders are born (they called them “Born Believers”), and those who believe that leadership can be taught (“Made Believers”). The “Born Believers” see innate personality traits such as charisma as the biggest contributor to leadership. The “Made Believers,” on the other hand, see training and experience as the greater factor.

Just as with emotional intelligence, leadership skills should be presented in a practical format. Asking young professionals to rate themselves on leadership attributes will tell them you believe in their potential, and give them a model for improvement. These include, but are not limited to, “I am always honest with myself and everyone else,” “I always collaborate and share my ideas,” and “I make decisions boldly, and learn from my mistakes.” As with the rating tool for emotional intelligence, a similar personal assessment for leadership principles will provide candidates with a practical way to self-improve.

Tapping into the Millennial Outlook

In their July 2015 Millennial Leadership Survey, workplacetrends.com confirms the need to adapt to the leader-innovator. Its study showed that 91 percent of millennials aspire to be leaders, and that they are “motivated by a desire to transform themselves and their colleagues, and the world around them.” They conclude with this challenge: “If companies want to build engaged and productive workforces, they will need to find a way to tap into the Millennial Outlook.” This is exactly the goal for leader-innovator onboarding.

The pressure to train new hires solely for technical skills is understandable but short-sighted, especially given the research regarding failures in the workplace. While managers who are hiring need to fill open positions quickly, and need for them to be productive, they also need them to stay on the job and be motivated for the long-term. Training new hires as leader-innovators will not only improve employee retention, it will establish collaboration as the norm, and change as a welcome challenge.

Paul Mahler is the founder of The Leader Within, offering practical leadership and business skills training for new-hires, and the developer of The Leader-Innovator Certificate program for young professionals.