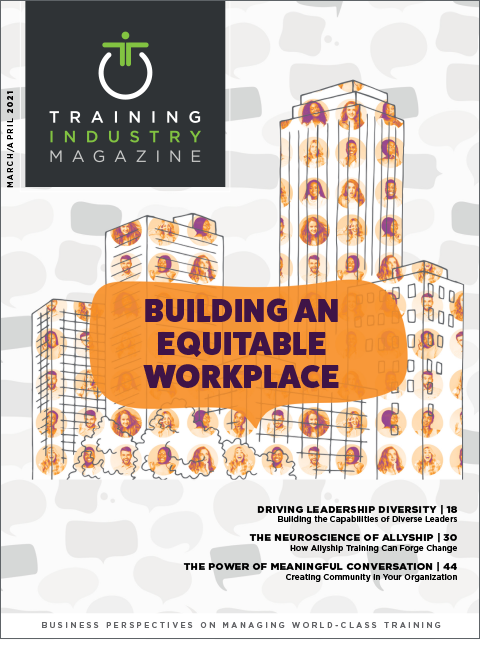 While concerns about inequities and lack of diversity have been mounting for years, the events of 2020 laid bare longstanding, structural inequities and brought these issues to the forefront of our national consciousness. In the face of public outcry, organizations are pledging to increase their investment in diversity, equity and inclusion (DEI) training. According to a recent survey by Fortune and Deloitte, 96% of CEOs confirmed that DEI is a strategic priority for their organizations. Learning and development and talent leaders are expected to intensify their efforts to stamp out systemic inequities and accelerate organization-wide culture change.

Allyship as a Pathway to Systemic Change

Individual efforts alone, no matter how well-intentioned, rarely affects systemic change. Systemic change ultimately stems from everyone in the organization taking action. That’s why the practice of allyship is emerging as a strategic mechanism used by individuals and organizations to collaboratively promote equity in the workplace.

According to sociologist Tsedale M. Melaku, allies are a collective of “collaborators, accomplices, and coconspirators” who “drive systemic improvements to workplace policies, practices, and culture.” However, most existing DEI training is designed to address bias on an individual level and not necessarily on the systemic level. Organizations are starting to recognize the need to develop allyship training for system level change; companies such as Microsoft, Levi Strauss & Co. and Airbnb have recently rolled out allyship training to equip employees with skills to combat inequities and act as effective allies.

It is not enough to get allies to come to the table. To harness the full power of allyship, it is important to understand the issues that impede collaboration between allies and design training programs that promote effective allyship. Allyship work is challenging, because it requires individuals with different experiences and cultural backgrounds to collaborate and work toward common goals and outcomes. Allies can bring potentially conflicting worldviews, values and mindsets which – if not managed appropriately – can lead to misunderstanding and conflict. Therefore, allyship training is most effective when designed with the diversity of allies in mind and when it fully prepares them to overcome the challenges inherent in working in diverse teams.

Allyship training is most effective when designed with the diversity of allies in mind.

So, what kind of training builds allies? There isn’t one defining characteristic, but there are insights from neuroscience research that should be considered when developing and delivering training.

The impact of threat in DEI training is often underappreciated but can be especially detrimental in the context of allyship training. When people are told they are part of the problem because they belong to an advantaged group (e.g., white, male, straight, etc.), it is natural to feel attacked. This also challenges their sense of fairness; they may feel blamed for the actions of a group they cannot help but belong to. This is important to consider because activating someone’s threat system leads to defensiveness and is not conducive to establishing allyship.

How concepts are presented is also important. For example, training often includes discussion about implicit biases and techniques for bias mitigation. Learners can often feel criticized for possessing biases if it is not explained that biases arise from the brain’s natural tendency to create shortcuts based on our experiences to help us function within our world. This does not give people “a pass”; they should work to mitigate biases that are maladaptive, but they need to understand the origins of bias in order to avoid feelings of blame or defense.

Learners can also feel threatened by other groups within the allyship. Disadvantaged people’s sense of status and fairness can be challenged, and they can feel resentment and demotivation when advantaged allies draw attention to themselves – intentional or otherwise – or are given credit for successes. While many think of allies as primarily individuals from an advantaged group, an ally can also be a member of another disadvantaged group (e.g., an Asian American supporting Black Lives Matter). Although people from other disadvantaged groups can be helpful allies to the main group being affected, it is important for training designers to account for potential conflicts that may exist between disadvantaged groups. Training should raise awareness about these issues and help learners deal with potential threats.

Allyship necessitates speaking for others when inequity is happening. This can be difficult due to potential repercussions. Allies, particularly advantaged allies, could also be fearful of making missteps. These fears can prevent potential allies from behaving as allies, even if they believe in the cause. Typically, training does not adequately address threats pervasive in allyship or provide strategies to help deal with threats, despite research pointing to promising emotional regulation techniques.

While it is impossible to remove all threats, it is important to be mindful of the many threats people face and to address them when possible, because they can cause potential allies to disengage from training and prevent them from opting in to allyship.

Allyship training is about winning hearts and minds – not forcing people to be allies. People need to feel that they are choosing to be part of something rather than having it be imposed on them. In fact, removing autonomy by telling people how to think can backfire and make people even more biased in their thinking. To gain buy-in, training must recognize humans’ egocentricity and help learners see why allyship is relevant and valuable to them, keeping in mind that different subgroups within an allyship have different needs. Ultimately, this can mean the difference between someone passively accepting change and someone actively driving change.

Include People as Part of the Solution

Effective allyship training brings diverse groups together to face difficult challenges. How differences in background, viewpoints and values are handled can promote or hinder collaboration among allies. Diversity training that emphasizes the differences between groups can lead to increased bias. On the other hand, overemphasizing harmony between groups can also backfire. We should not ignore the reality that people have very different lived experiences with inequity but dwelling on those differences may not lead to desired outcomes. To this point, one of the most effective interventions for prejudice reduction is redefining social categories by highlighting intergroup similarities.

People need to feel part of a cohesive team of allies working toward shared goals of initiating positive social and business changes. This is where training often falls short. Placing blame on training participants can not only set off a threat response but create an “us” vs. “them” mentality. Research has revealed how easy it is to create division; even when people are assigned  to arbitrary  groups, they differentiate between in-group and out-group members.

Why is this important? In-group bias, the tendency to prefer someone within your social circle or group, is a well-established phenomenon. Brain imaging studies reveal that reward areas of the brain become more active when in-group members succeed compared to out-group members, suggesting we are more likely to celebrate the success of our teammates. People are also less likely to empathize with someone whom they perceive as belonging to a different group. All this impacts how we behave towards others.

One-time, one-size-fits-all DEI training results in disengaged learners who view training as a box to check. To better inspire allyship and promote long-term changes, organizations should examine their training through the lens of human-centered design to be more intentional in the following:

It’s critical to identify where learners are on the “allyship continuum” to customize training for the target audience. Organizations possess different cultures and starting points for DEI, and people within organizations have different understandings of and experiences with DEI. People at all levels are critical in cultural change. However, it is a disservice to ignore that, in addition to personal differences as an advantaged or disadvantaged person, a learner’s function and level within the organization impacts their knowledge about the organization, situations they face and their sphere of influence to affect systemic change.

Conducting empathy interviews helps designers better understand and empathize with learners. User personas can then be developed to characterize their motivations, challenges and training needs to ensure that the unique needs of the audience are considered in design. When this is not done, we lose an opportunity to gain allies; if people feel that training is not relevant for them, they are likely to tune out.

With knowledge gleaned from empathy interviews, designers can use realistic examples of how exclusion and inequity could show up in the target audience’s world. Training that is vague will not be much use to learners. For example, it is easy to agree not to be racist, but people may not recognize all the ways that racism shows up or specific behaviors to enact in response.

Behavioral change is difficult and effortful, because our brains are wired to rely heavily on shortcuts. Practice is needed for long-term behavioral change. Simulation is an effective tool, because it can mimic the real-life pressures people face while enabling them to practice speaking out.

One-off training on everything at once can overwhelm learners. Consider how learning opportunities can be scaffolded and reinforced across a holistic learning journey.

There is an outcry and a yearning to address systemic inequities. However, lasting systemic change does not happen organically and requires a coalition of allies to forge change. Effective training is needed to build and prepare allies. Leveraging insights from neuroscience insights, we can be more intentional when designing training to ensure authentic allyship and prepare allies to affect lasting, systemic change.