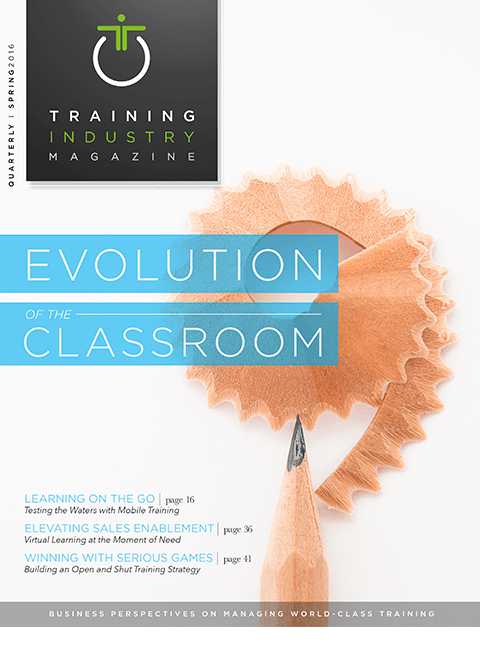 View in Magazine
Technology is making an impact on how instruction is delivered.

I vividly remember the job interview for my first corporate training position. As my potential employer was talking about the responsibilities of the position, she took me to the training room of which she was extremely proud. It was state-of-the-art.

The room had five rows of long tables and each row had built-in tower computers. On top of each table in the row was a monitor with a slide out drawer for the keyboard so it could easily be tucked away when class was over. The instructor’s podium had a clear plastic top so that the instructor could see the monitor that had been placed in the podium and not have the view of the student’s obstructed. Behind the podium was a huge whiteboard.

The best part was the fact that through a switching device, the instructor could display any individual’s monitor on a big screen hanging from a corner in the front of the room. Since this was over 20 years ago, the monitor was huge. It had one corner sticking so far down, the company had taped foam around the protruding corner to prevent taller students from banging their heads.

Walk into a modern training classroom in 2016 and you’ll still have tables with learners facing front toward some sort of display screen. The tables might be a little roomier because they don’t have built-in computers or keyboards. Most learners will have their own laptops or tablets. In some of these modern classrooms, the instructor will be able to display a student’s screen with some sort of software and perhaps there is a smartboard instead of a whiteboard.

So while physically, it may appear that classrooms are evolving slowly, there are a number of tools accelerating the evaluation of learning within the classroom. One such tool is the audience response system (ARS) where students, using a mobile device, can respond to questions asked by an instructor and all the answers are automatically tallied and displayed on the instructor’s screen. While the ARS has been around for years, the usage has recently exploded. The ARS provides instructors with a methodology of gaging the knowledge acquisition and mood of learners. Many allow for word clouds to be created, full sentences to be displayed on screen and some even provide gamified apps that one team can play against another.

When used correctly, an ARS provides more immediate feedback to learners, a method for the instructor to monitor the progress of the class and a way to engage every learner in the classroom rather than just the person answering a question.

But an ARS is not the only evolution to hit the modern classroom. Multi-touch tables, while not as widespread, are basically tables with the tabletop being a computer screen with which the learners can interact. This means there is no screen acting as a barrier between the learner and the instructor and learners can simply look down at their table to see the information the instructor wants to provide. It also gives the learners the ability to resize the information. The instructor, instead of displaying one of the learner’s screens in the front of the room can display it on each of the tables in the classroom. The interactive table surfaces allow for collaboration, sharing of documents and information and a way to break down the barrier of each learner staring at his or her individual laptop or tablet.

And to avoid anyone hitting their head on computer monitors, computer screens are now so thin, they can be rolled onto any surface such as a wall. This means interactivity and engagement can occur all around the classroom and tall students will no longer bump their head on dangerous corners.

At a glance, it may not seem like the classroom environment is evolving but, upon closer examination, you can see that technology is making an impact on how instruction is delivered and it is continuing to advance.

Karl M. Kapp, Ed.D., is a professor of instructional technology at Bloomsburg University and the author of six books and the Lynda.com course, “Gamification of Learning.”