In his book “Homo Deus: A Brief History of Tomorrow,” historian and author Yuval Noah Harari predicted, “Most of what people learn in school or in college will probably be irrelevant by the time they are 40 or 50. If they want to continue to have a job, and to understand the world, and be relevant to what is happening, people will have to reinvent themselves again and again, and faster and faster.” Adaptability is the go-to ability for the new age.

You can’t book-learn adaptability. You must work on yourself as if you you’re your own startup through internal entrepreneurship. You must be your own disruptor and interrupter and still be able to thrive. Like it or not, it’s inspiring to be knocked down a few times and find the strength to get up, shake it off and realize you’re tough enough to move on.

Several times, the companies that I have worked with floundered for one reason or another: Co-founders fell out, product quality failed or a disagreement among key shareholders came to a head. Each time, it felt like a failure, yet they were opportunities to put into practice what I had learned about board behavior, crisis management or operations. The costs have been the same as my MBA, but the learning is often far greater.

How do you reinvent your work, either to hedge yourself against obsolescence or because you see an opportunity to move to greener pastures? The best way is to take stock of your assets, strengths and values and then pivot to a niche that is adjacent to or leverages your current expertise.

Take stock of your strengths and values, and pivot to a niche that is adjacent to or leverages your expertise.

I worked in consulting with a friend from New York many years ago, and after going our separate ways and having many life experiences, I learned she’d been in a car accident. Confined to a bed for months, she realized she would never be able to consult in the same way. Consultants fly every week and work nearly around the clock, and she was no longer physically able to handle that lifestyle.

Undaunted, my friend analyzed her core skills and attributes and weighed them against opportunity. She knew how to read markets, make connections and help put people on a good path, and she leveraged that momentum into starting several companies. With newly honed coaching skills, she launched a company that assists startup co-founders in successfully launching their businesses or weathering problems.

Proactive Reinvention: Finding Change Before It Finds You

Sometimes, reinvention occurs in response to external circumstances, such as a downsizing or technological change in an industry that eliminates your job or makes it less interesting. Other times, it is a proactive decision to seek out new perspectives.

An increasingly popular way to “zoom out” in order to see new opportunities is time away from work. Consider Stefan Sagmeister, who runs his own marketing company in New York City and who has become famous for his unique take on traditional learning and work. We spend 25 years of our lives learning and 40 years working, with 15 years left for retirement. Sagmeister’s idea is to cut five years of retirement and intersperse them throughout the working years. Every decade, give or take, he takes a year off to maximize invest in his creativity, coming back with new ideas for his business and life.

Elaine Cheung is a chief financial officer (CFO) who has changed industries, from being a music executive to working in pharmaceuticals and then retail. Along the way, she has adapted her approach to the transitions she’s made.

Her first “reinvention sabbatical” came after a restructuring. She felt vulnerable but took enough time away from work to realize she could apply her skills more broadly. Then, she confidently moved into a new industry. The trouble was, she realized in retrospect, she hadn’t maximized her time off for the next stage in her career.

Roughly a decade later, corporate restructuring triggered another sabbatical. Despite being the breadwinner with three children under three years of age, she decided to turn this unfortunate situation into a positive experience. With the goal of exploring whether she could combine meaningful purpose with work and career, she leveraged her experience and seniority to volunteer for a nongovernmental organization called Community Business, which works with large companies, where she focused on women on boards.

This situation was an opportunity for her to meet people in the community, broaden her network and advocate for women in leadership. When she dug into her values and contributions beyond her job, she realized she could have an impact. She wanted to be a role model, in a position to impact women coming up the pipeline by teaching them about leadership and how to be a manager.

This volunteer role was fortuitous on the networking side, as through those contacts, she found her next job, as well as several board seats, including on the audit committee of the United Nations’ World Food Programme. She’s now a CFO for an aquaculture company, a spinoff from the owners of her old company whose restructuring triggered her first sabbatical. She is currently investing in her public speaking skills to take her advocacy to the next level.

There are few leaders doing what Elaine accomplished. She made a conscientious choice to learn something new, network strategically, and fulfill her broader value of giving back by being a role model and speaking about her journey. By focusing on your career adaptability, you can make similar improvements in your life.

By focusing on your career adaptability, you can make improvements in your life. 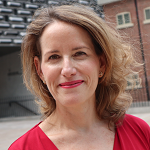 Diana Wu David is a strategist, innovator and entrepreneur and the founder of Sarana Capital and Sarana Labs, which transform how executives work and prepare companies for the future of work, invest in edtech and HR technology, and support innovative education initiatives across public and private sectors. A super-connector of people and a sought-after speaker, Diana lives in Hong Kong with her husband and their three children. This blog post is adapted from her new book, “Future Proof: Reinventing Work in the Age of Acceleration.”