It is clear that most organizations will not be returning to where they were before the COVID-19 pandemic. Instead, the best organizations are coming back to an unusual opportunity not only to recover but to improve.

What we call “human resources” (HR) today will be very different tomorrow, as humans and computers become increasingly intermingled. HR departments will, if they rise to the occasion, support what MIT professor Thomas W. Malone calls the “superminds” of tomorrow.

In the future, intelligent digital co-workers will be everywhere. These machines will be more human-centered, and humans will be digitally amplified. Most importantly, by looking at themselves in digital mirrors, humans will understand more deeply what it means to be human and what we humans do best. We emphasize effectiveness (doing the right things), while the computers emphasize efficiency (doing things the right way).

As superminds emerge, humans will learn how to combine our skills with the capabilities of advanced digital tools and media. Human skills and computer augmentation will blend in powerful new ways that are already apparent in the gaming industry. The Institute for the Future’s (IFTF) Jane McGonigal, one of the world’s leading designers of socially constructive games, defines gaming as “emotionally-laden attention,” and we could use the same phrase to define a good story. A good game is a good story that the player can immerse himself or herself in. And, as author Orson Scott Card says, “The essence of training is to allow error without consequence.”

Here’s an example of how humans and machines can blend effectively:

Just after 9/11, IFTF was asked to do a forecast on the future of fun at Walt Disney World in Orlando. Parents were understandably concerned about safety, while children wanted a play-oriented experience where they could be scared in a safe way. The Magic Kingdom was a place to go to escape the trauma of the everyday world, where terrorism loomed.

My experience during this time with an early prototype called Pal Mickey taught me an important lesson about learning. My Pal Mickey, hooked on my belt to guide me through the park, stopped working one day. When I brought my malfunctioning Pal Mickey to one of the cast members (the term used to describe employees), she said it no problem and that she would give me a new one. I was disappointed, however, that I had to give up my Pal Mickey. I asked if she could heal my Pal Mickey instead.

She paused for a moment but then said, “Oh, I think I saw a wizard passing by just a moment ago!” After slipping behind a curtain, she returned, bursting with enthusiasm. “Your Pal Mickey has been healed!” she said.

I’m quite sure that she gave me a new Pal Mickey, but she did it with such charm that I happily went on my way.

Walt Disney World is known for its animatronics, but more subtly, it has also mastered the art of blending human and machine resources. Its cast members use a wide range of digital tools while maintaining a human touch to create magical experiences. Future HR organizations will need that same skill.

Pal Mickey evolved into the Magic Band. Walt Disney World is now a huge computer-enhanced world where kids can be safely scared. But it isn’t just a computer; the cast members are now augmented in ways that don’t automate but do amplify the experience, delivering powerful computing power in a very human way.

To thrive, leaders will need new full-spectrum thinking capabilities and skills to make good use of emerging tools and media.

To thrive, leaders will need new full-spectrum thinking capabilities and skills to make good use of emerging tools and media. The market will require companies, nonprofits and government agencies alike to offer a wide spectrum of working arrangements so employees can make a living while having a life. Networking technologies make it much easier to work anytime, anywhere — although, working anytime doesn’t mean you have to work all the time.

I call this capability “the literacy of being there without being there.” Fortunately, the tools for distributed work will grow even more advanced over the next decade — but we will need our own human self-discipline more than ever. The more intelligent computers become, the more humans will value other humans. The more digital we become, the more we will value human interaction.

Here’s what you can do to bring this foresight to life:

Encourage and Reward Full-spectrum Thinking at All Levels of Learning

Your goal should be to improve how people think. Encourage use of new clarity filters to help move beyond categorical thinking. Full-spectrum thinking is probably already happening at your organization, but it needs to be communicated, supported and scaled. And, don’t forget, gamified engagement is the most powerful learning medium in history and is a great way to practice full-spectrum thinking.

Develop a Cross-generational Mentoring Program for Your Workforce

Cross-generational mentoring is one of the most profound yet simple changes to introduce. At IFTF, almost every research team is a cross-generational team. For the last 15 years, I’ve had a young person working very closely with me. My criteria for selection is simple: He or she must be different from me in an interesting way.

Diversity correlates with innovation. We can now make a separate yet complimentary argument that spectrum diversity will increase innovation, performance and growth — and growth may be a more powerful motivator than guilt. 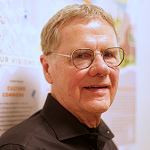 Bob Johansen is a distinguished fellow at the Institute for the Future (IFTF), the world’s leading futures organization, where he served as president from 1996 to 2004. He has written 11 books on leadership and change management, including the bestselling “Leaders Make the Future” and “The Reciprocity Advantage,” and led workshops at global corporations from Intel to P&G, as well as universities and nonprofits. Learn more about his decades of helping organizations prepare for the future and his latest book, “Full-Spectrum Thinking,” at IFTF.org.

M&A in Corporate Training: Investments and Acquisitions of the First Quarter of 2022