Lately, there has been a lot of talk about the accelerating pace of change and the transformational impact it will have on the workplace in the near future. Should we believe it?

Something that should give us pause is the long history of pundits predicting unprecedented change just around the corner. “The future is not what it used to be,” New York Times columnist Paul Krugman wrote in 2018. “They said that change was accelerating in 1900,” Oxford business historian Chris McKenna told the World Economic Forum that year. “They said it in 1920. In 1940, in 1960, in 1980 and in 2000. So the presumption is that the people who said it before were wrong, but we’re right now.”

The Slowdown of Change

Are the pundits right this time? When my grandfather was born in 1905, the horse was the dominant mode of personal transportation. Television didn’t exist; the first (silent) Hollywood movie came out when my grandfather was five. The Wright brothers’ pioneering flight was just two years earlier. There was no atomic bomb and no nuclear power. Electricity was new, and there were still plenty of gas lamps. The first hard plastic wouldn’t be invented for two more years. There were no modern appliances, and the ice man came every day. There were no vaccinations or even antibiotics; people often died of simple infections. Yet my grandfather lived to see man on the moon, routine air travel, the advent of the computer age and a lot of other wonders.

I, on the other hand, was born in 1956. The significant changes we’ve seen since I was a kid start and end with my smartphone. In his book “The Great Stagnation,” economist Tyler Cowen writes, “Apart from the seemingly magical internet, [American] life in broad material terms isn’t so different from what it was in 1953 … Life is better, and we have more stuff, but the pace of change has slowed down compared to what people saw two or three generations ago.”

Indeed, productivity went up like a rocket until about 1970 and then slowed down; for the last decade, it’s been in a slump. In 2016, economist Robert Gordon told Quartz, “I’m at war with the techno-optimists. They think we’re on the verge of some great acceleration of productivity. I think we’re going to see much the same kind of productivity numbers that we’ve seen over the last 40 years.” As early as 1987, economist Robert Shiller (who later won the Nobel Prize) wrote, “What everyone feels to have been a technological revolution … has been accompanied everywhere … by a slowdown in productivity growth.”

Productivity went up like a rocket until about 1970 and then slowed down; for the last decade, it’s been in a slump.

One counterargument concerns the success of internet-based companies like Airbnb and Uber, which have achieved great valuations — albeit not great profits — by creating internet platforms to bring buyers and sellers of a service together. Many pundits see the Uber/Airbnb blueprint as a pattern that entrepreneurs will replicate across many, if not most, industries. If that were to happen — if traditional industries were to be taken over by online companies — there would be enormous upheaval. But that’s a big if, considering it’s based on a couple companies that haven’t even shown that they can turn a profit yet.

What happens if the predicted level of upheaval does come? The pundits’ predictions for the workplace seem dire: Stable careers and long-term jobs will be a thing of the past. We can all expect to be fired a lot or not hired in the first place, because traditional jobs will be replaced by what we call “gig work.” And we can kiss career specialties goodbye; jobs like nurse, plumber, teacher, accountant, civil engineer or salesperson are going away. We don’t even know what will replace them, but we are told that at least 85% of the jobs people will do in 2030 haven’t even been invented yet.

The Impact on Learning and Development

If true, these changes will have a staggering impact on corporate learning and development (L&D). The massive demand for constant reskilling will overwhelm most organizations, which will not have the time, money or expertise to handle it. Schools change too slowly to help. Workers will be forced to become, in sociologist Tressie Cottom’s wonderful phrase, “roaming autodidacts”—relentless self-propelled learning machines. As futurist Alvin Toffler wrote — 50 years ago, it’s worth noting — “The illiterate of the 21st century will not be those who cannot read and write, but those who cannot learn, unlearn, and relearn.”

In the end, though, this radical change narrative is based on the flimsiest of assumptions. There is no reason other than a vivid imagination to think that things are about to change more radically than they have in the past, and there is no evidence that a high percentage of jobs in 2030 will be ones that don’t exist today. As Lauren Oyler wrote last month in the London Review of Books, “What’s truly amazing about these times is that we have more access than ever before to material that demonstrates the continuity and repetitiveness of history, including evidence of the insistence by critics of all eras that this time is different, yet so many still buy into the pyramid scheme that we are special.”

Radical change narratives persist largely because they are good for anybody who has something new to sell. In a stable world, skepticism toward the new is the order of the day, but if you can convince people that their current methods won’t work in the future, you’ll have a more receptive audience. Consultants used to call this approach the burning platform: Convince your clients that their current state is untenable, and they’ll be receptive to the changes you recommend. As writer Audrey Watters said recently, “It’s not that these things are necessarily trends; it’s that certain folks very much hope they will be.”

The best guess is that the world of work in 2030 will be a lot like it is today. It is a safe bet that trends in motion now — gig work and automation, at least in manufacturing — will continue. But there is unlikely to be any run-away change spiral. So, try to relax, and take the pundits’ predictions with a grain of salt. As Yogi Berra famously (allegedly) said, “It’s tough to make predictions, especially about the future.”

Radical change narratives persist largely because they are good for anybody who has something new to sell. 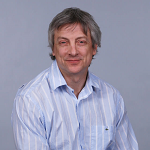 Dr. Gregg Collins is chief learning scientist and head of instructional design for NIIT’s Corporate Learning Group. With a doctorate in artificial intelligence from Yale University, Dr. Collins played a key role in the seminal research carried out at the Institute for Learning Sciences and was one of the authors of Northwestern’s graduate program in instructional design. He was a co-founder of Cognitive Arts Corporation, which was incorporated in 1995 to commercialize ILS and was acquired in 2002 by NIIT.

How to Make Inclusive Leadership Training Relevant for Business Leaders

L&D Takes the Lead: Pioneering the “New World of Work”