When a co-worker you admire openly criticizes your work, when the head of accounting looks at you in the same disapproving way your mom used to or when your colleague keeps asking questions about things he should already know, you may experience a common phenomenon known as a trigger reaction.

A trigger is any stimulus that you perceive to be stressful. It may be a specific person, a topic you believe is risky, a power difference or an unusual context. In other words, any of the situations above, and countless more, can be triggers.

The stimulus may be objectively difficult, but the difference between facing a tough situation and being triggered is your emotional reaction. When you’re triggered, you are often unable to concentrate, and you might be unproductive, upset or unable to claim your sense of worth. The best way to reduce the effects of triggers is to understand them and learn what lies beneath your reactions. This awareness gives you choice and access to resources.

Each of us can be triggered by different circumstances, and we each react differently. But because our triggered behaviors are unconscious, they are typically patterned, predictable and limiting. Here are some of the behaviors that can occur when we are triggered:

Trigger reactions are so strong that they limit our ability to choose, allowing circumstances to determine our behavior rather than our strengths or resources. I call these behaviors power leaks, because most people give away or leak power when they are triggered. Power leaks describe one’s loss of effectiveness as the result of being triggered.

It’s important to note that feeling triggered is not strictly emotional; it can also be physical. Cues that accompany a triggered reaction may include a racing heartbeat, shortness of breath, feeling hot, or losing your train of thought or words.

Once you’re triggered, instead of focusing on what you can contribute, your mind becomes fixated on a story. The story you tell yourself usually activates your fears, perceptions of scarcity and patterns of self-protection. It amplifies the effect of the trigger.

The story you tell yourself usually activates your fears, perceptions of scarcity and patterns of self-protection.

When we’re triggered, we tend initially to blame the situation or another person for our reaction. We’ll say things like, “He’s such a jerk” or, “That email was so aggressive.” In reality, the story we’re telling ourselves (on repeat) is the real culprit, rendering us ineffective or unable to act.

Recently, a client shared with me that she was triggered when her idea was dismissed at a meeting. She felt angry, and her power leak was to withdraw. The story she told herself was, “Maybe I don’t know what I’m talking about.”

Another client shared that he was triggered when he received some unexpected negative feedback. He immediately felt anxious and discouraged, and he leaked power by becoming argumentative with the co-worker who had given him the feedback. The story he told himself was, “I’m not good enough for this role.”

It’s important to stress that in each case, the story my clients told themselves intensified negative feelings, took their thoughts away from productive work and instigated power leaks. The stories limited their possibilities and made it difficult for them to access their strengths.

The thing about stories is they are often unconscious and persistent. Research shows that the narrative you tell yourself has consequences for your choices, your behavior and your health. The story you tell yourself makes the trigger more unbearable and your power leak more pronounced.

The narrative you tell yourself has consequences for your choices, your behavior and your health.

With reflection, most people are able to identify the story beneath their triggered reaction. To diminish the impact of a trigger, try this exercise:

Using my client examples, here’s what it may look like: 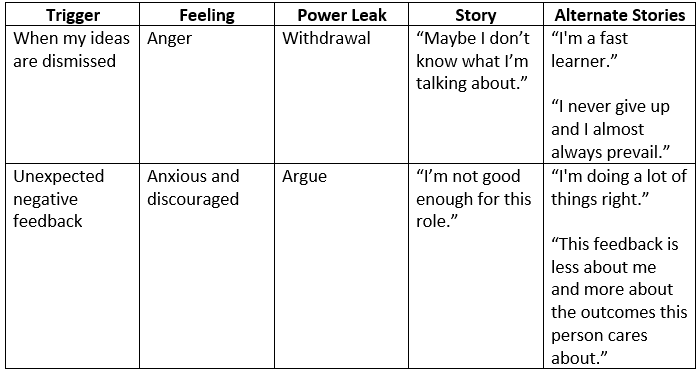 Most of us have multiple triggers, so you’ll need to create a new story for each one. Though you’ll never stop being triggered or having power leaks, with practice, it’s possible to recognize when you’re being triggered. This awareness allows you to have choice around your automatic responses so you don’t give away your power. You’ll also learn to anticipate triggers and recover more quickly by telling yourself an alternate story to lessen the effects.

In organizational life, the biggest challenge we face isn’t people, tasks, deliverables or pressures. It is our reaction to these stressors, amplified by our stories, that results in disabling power leaks. With awareness and new stories, we can remember the strength and power available to us. With practice, you can make the seeming minefield of triggers in the workplace feel more like a few manageable molehills.

With awareness and new stories, we can remember the strength and power available to us. 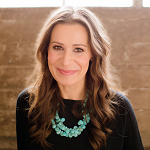