“Whenever you see a successful business, someone once made a courageous decision” (Peter F. Drucker).

We all make many decisions each day. Some are small and relatively easy, and we can make without thinking much about them. But there are also big decisions that can change your business and your life and utterly transform both.

Researchers know that all decisions are made in context, and there are outstanding examples of decision-making that can take your life and career to the next level. Throughout history, people have made decisions knowing that lives are at stake, while others have paved the way for global changes in art, science, religion and business.

A study of 23 men and women whose decisions shaped the world suggest a number of important lessons and principles in decision-making:

A.P. Giannini, the founder The Bank of Italy (a forerunner to Bank of America), saw a market that others completely missed: immigrants with few assets, whom other banks ignored but whom he served with loans only on the condition they pay them back.

Henry Ford made several groundbreaking decisions. While most acknowledge his invention of the assembly line, less known is how he doubled workers’ wages from $2.50 per day to $5 per day and built a car for the common man at a time when automobiles were only affordable for the elites.

Take full responsibility for your decisions and their outcomes.

Muhammad Ali made a significant decision in 1964, when he changed his name from Cassius Clay (which he described as a “slave name) and converted to Islam. He refused military service on his religious beliefs, an act that was finally vindicated by the U.S. Supreme Court but not before costing him four years at the peak of his boxing career. A key takeaway is to take full responsibility for your decisions and their outcomes. Ali did not hide behind anyone, no matter how vindictive public reactions to his decisions were.

In 2012, Nobel Prize-winner Malala Yousafzai, then 15 years old, was shot in the head by the Taliban as she road home on a school bus. It was part of a concerted effort to attack educational institutions, particularly those teaching women. As Malala has said, “One child, one teacher, one book, one pen can change the world.” The lesson? Have courage to do the right thing, whether it is large or small, and seek every opportunity to broaden your knowledge of the world and its people.

As publisher Steve Forbes notes, “Good decision-making requires discipline, as well as an ability to weigh an array of facts, even when they are contradictory. It requires being receptive for advice — only the ignorantly arrogant think they always know what they need to know — and when necessary, asking for it is a means to ‘give ownership’ to those giving it.”

Klaus Schwab, founder and executive chairman of the World Economic Forum, says, “I’ve learned that it is near impossible to predict the exact course of your own life or career, let alone that of the world at large … We must always maintain a positive mind-set. Nothing else nurtures good decision-making better than positive energy.”

Have courage to do the right thing, whether it is large or small, and seek every opportunity to broaden your knowledge. 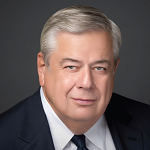 Robert L. Dilenschneider formed The Dilenschneider Group in 1991. Headquartered in New York and Chicago, the firm provides strategic advice and counsel to Fortune 500 companies and leading families and individuals around the world, with experience in fields ranging from mergers and acquisitions and crisis communications to marketing, government affairs and international media. Formerly president and CEO of Hill & Knowlton, he is the author of the bestselling books “Power and Influence,” “A Briefing for Leaders,” “On Power” and the newly released “Decisions: Practical Advice from 23 Men and Women Who Shaped the World.”