Between January 1, 2018 and February 15, 2018, I coached 100 women for 100 hours. These women were everything from video game designers to business owners and women running for Senate and other offices; worked in industries from fashion to education; were college students, moms transitioning to work, and retirees (and everything in between); and came from down the street to New Zealand. Aside from being women, what they all had in common? Imposter syndrome.

Also known as the inner critic, imposter syndrome is that nasty voice that tells us we are a fraud. It might say things like, “Who are you to [do this, charge that, lead this]?”

Also known as the inner critic, imposter syndrome is that nasty voice that tells us we are a fraud.

For women in leadership roles, that nasty voice is often akin to a yell, especially when it comes down to how a leader “should” look and behave. One of the women I coached runs a tech company with three other co-founders – all male. She is a giving, kind and even-keeled young woman, and her co-founders were constantly telling her to act more like a leader. When she questioned them about what a leader should act like, their responses were, “more aggressive,” “direct,” and, “basically nothing like me,” in her words. Even though she thought that she was a good leader, she let that nasty voice chip away at her confidence to the point where she would freeze up in investor meetings because she “wasn’t a leader.”

While we are all different individuals who learn in different ways, here are three ways for women leaders to start to quiet that inner critic once and for all.

1. Actively Listen to Your Team.

Many people don’t realize one of the greatest leadership skills is one that we practice all the time: active listening. Pick an amazing example of leadership, and audit that person’s behavior. Are they a good listener? Even if they aren’t lauded on listening, that skill is integral to how you perceive them as a successful leader. Great leaders listen; they attend to verbal and nonverbal communication and aren’t chasing down agendas and shiny objects. They are checked in, present and paying attention.

One of the greatest leadership skills is one that we practice all the time: active listening.

Tip for Leaders: During your next team conversation, focus on the person talking. Don’t think about dinner, the noise in the background or the emails piling up – attend to everything the person is saying and not saying. Non-verbal communication is just as important as verbal communication.

When imposter syndrome says, “What do you know?”, you can answer, “A lot. I pay attention.”

2. Learn How to Give Feedback.

When giving feedback, leaders should keep these principles in mind:

Tip for Leaders: Think about someone from whom you’ve been withholding feedback. Why have you been waiting? Try providing the feedback with this three-pronged approach.

When imposter syndrome says, “You aren’t good at this,” you can say, “I am good at feedback. Thanks for your input; now, stop talking so I can focus on my work.” Be specific, kind and active.

3. Build Trust and Vulnerability – With Yourself.

If leaders don’t trust themselves, how will their team members trust them? If they can’t get their team members to trust them, they won’t do their best work. Leaders should trust that they are leaders for a reason. And if they need to improve on things? Help them improve. Encourage them to take a class, read an article and figure out how to get to where they want to be.

When imposter syndrome says, “Who could trust you?”, say “Me! and I’m working on it right now.”

When imposter syndrome says, “Who could trust you?”, say “Me! and I’m working on it right now.”

March was Women’s Leadership Month at TrainingIndustry.com. Check out our research report “Women’s Access to Leadership Development: A Tale of Two Experiences” by clicking here, watch our webinar recording, listening to this podcast episode or read the other great articles we published this month on developing women leaders: 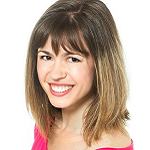 Jen Brown (Oleniczak) is the founder of The Engaging Educator and The Engaging Educator Foundation, which offers free and low-cost improv workshops for educators, at-risk adults, teens and students on the autism spectrum. She is the author of the new book “Improv[e]: Using Improv to Find Your Voice, Style, and Self.”

Onboarding and Learning in the Flow of Work