Most of us have at least a passing familiarity with yin and yang, the principle of psycho-spiritual symbiosis first articulated by the Chinese cosmologist Zou Yan in the third century BCE. This philosophy recognizes two opposing forces, contradictory yet inseparable, which continuously vie with one another while perpetually seeking harmonious balance.

Yin is female, passive, flexible, internal and mature. Yang, on the other hand, is male, active, firm, external and youthful. Neither is superior to the other, and neither can exist without the other. It is the constant waxing and waning, the ceaseless reversal of primacy, that defines the existence of our lives and our universe.

Does this sound like the normal to-and-fro of human interaction? It should. The pursuit of harmony and balance characterizes not only healthy human relationships but also successful leadership. As Dr. Naira Velumyan, founder of the Academy of Social Competency, observes, “Leadership requires both masculine and feminine qualities, along with an ability to maintain their balance and use them in the right place and at the right time.”

Successful leaders instinctively pivot between the competing roles of commander and consultant, critic and cheerleader, taskmaster and nurturer — in other words, between the traditional archetypes of father and mother. Whether a leader is a man or a woman, knowing when to adopt a more masculine or more feminine style is the hallmark of greatness.

Successful leaders pivot between the roles of commander and consultant, critic and cheerleader, taskmaster and nurturer.

A thousand years before Zou Yan, the teachings of Jewish philosophy and mysticism outlined the male-female model of creation in a way that closely parallels the duality of Yin and Yang. However, in one notable way the sages of Judaism departed from Chinese cosmology. In the language of Judaic tradition, masculinity is characterized primarily by the quality of compassion and femininity, primarily by strict justice.

By resolving this apparent contradiction, we can discover valuable insights into the strategies and tactics of effective leadership.

The Way We Are

Let’s first define our terms. Compassion is responding to the suffering of others and supporting people who are unable to support themselves. Justice is the demand for responsibility, accountability; and equity; the call for fair play and self-sufficiency; and valuing, as a matter of principle, only what has been earned and what is deserved.

It’s obvious why we equate compassion with the mother and justice with the father, but if we look beneath the surface, a more complex equation appears.

Compassion stems from the drive to actively create or to restore justice. Understood this way, we can say that compassionate behavior:

In short, compassionate behavior is descriptive of traditional ideas of masculinity.

Justice takes a longer view. Respecting the foundations on which values are built empowers a culture of compassion to flourish. Therefore, we can characterize behavior guided by justice as:

This view of justice describes an approach that applies a softer hand, allowing events to take their course and intervening only when necessary. In this way, it aligns with traditional notions of femininity, waiting for light to emerge organically from darkness and acknowledging the subtlety and nuance of the passive role.

According to Jewish mysticism, the original human placed in the Garden of Eden was androgynous, both male and female. Only afterward was this primordial being divided into Adam and Eve. Similarly, leaders have to call upon both aspects of their human nature and seek to unify them, even as they shift between favoring first one and then the other. In a court of law, compassion is the suspension of justice. In the courtroom of human relations, compassion and justice are two sides of the same coin.

Compassion seeks to help the disadvantaged and the immature achieve independence; by doing so, it transforms into justice. Indeed, one of the highest forms of charity is helping someone find and keep a job, thereby freeing that person from dependence on the compassion of charity.

Justice recognizes that genuine fairness requires the strong to account for the disadvantages of the weak and help compensate for them. In this way, justice appears as compassion. Some people need a helping hand before they can compete on an even playing field. Providing that opportunity is what creates a society that can function according to justice.

We Are the World

Rather than seeing compassion and justice as opposites, a visionary leader sees them as two different applications of an integrated ideal, of an elegant composite. The ability to synthesize the male and female roles, to be both father and mother, enables a leader to forge a culture that is simultaneously creative and disciplined.

Rather than seeing compassion and justice as opposites, a visionary leader sees them as an integrated ideal.

Productivity guru Simon Sinek argues that in our undisciplined age, managers are responsible for assuming the role of parents, providing the structure and guidance that many young people have never known. By definition, good parents make themselves obsolete by raising children who no longer need parenting. In the same way, good leaders encourage and reprimand, reassure and rebuke, and balance youthful boldness with mature experience and laser-focus with panoramic vision.

It’s worth noting that the word “discipline” is related to the word “disciple.” By managing the competing elements of human nature, a leader transforms employees into disciples and then enable them to mature into self-sufficient partners.

The most successful leaders position themselves as first among equals. By doing so, they create an environment where employees see themselves not as underlings but as colleagues — empowered, invested, and committed to the success and the mission of the team.

Isn’t that what every leader wants?

The most successful leaders position themselves as first among equals. 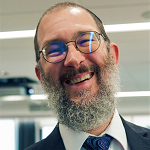 Yonason Goldson is director of Ethical Imperatives, LLC, where he teaches professionals how good ethics is good business and the benefits of intellectual diversity. He’s a keynote speaker, TEDx presenter and community rabbi, as well as a repentant hitchhiker and circumnavigator, former newspaper columnist and retired high school teacher in St. Louis.