Are you equipping your leaders with the skills they need to outmaneuver competitors as the digital revolution intensifies? To get a sense of the seismic shock of disruptive technology, just scroll through the apps on your phone. Running late? Call an Uber. Having a party? Load a playlist. And with one-click shopping at Amazon, there’s no need to head to main street.

Innovation eliminates inefficiency and rewrites the rules of the game. The choice business leaders are left with is a stark one: Evolve with the times or die.

Innovation eliminates inefficiency and rewrites the rules of the game.

Let’s take Kodak as an example of a spectacular fall from grace. Grab your handset and take a selfie. Not happy with it? No problem. Filters turn an ordinary photo into a professional shot, ready to share online. These tools have become a phenomenon, developing into social media channels in their own right – hence Facebook’s parting with a cool $1 billion for Instagram.

If senior executives hadn’t blundered, it could have been Kodak cashing in. Chances are, you had a Kodak camera back in the day. From its iconic 1900 Brownie model to more recent handheld camcorders, for the best part of a century, Kodak was a company at the top of its game. As recently as 1996, Kodak was the fourth most valuable brand in the U.S., but by 2012, it had filed for bankruptcy.

When the C-suite take a misstep, before you know it, even the biggest empires can fall. So, there’s plenty riding on the effectiveness of your leadership training program.

When the C-suite take a misstep, before you know it, even the biggest empires can fall.

Ironically, it was Kodak that developed the first digital camera. Back in 1975, an enterprising employee named Steven Sasson fashioned a prototype from a mishmash of parts: a digital cassette recorder, a Super-8 video camera an analogue-digital converter, plus a bunch of other components wired together with a few circuit boards. It was the same size as a toaster and took a whopping 23 seconds to record an image to tape, but the technical people he worked with loved it.

Management’s reaction? “That’s cute, but don’t tell anyone about it.”

Undeterred, in 1989, along with Robert Hills, he created the first DSLR camera, which only served to make the marketing team jumpy. Managers were so concerned about cannibalizing film sales, they didn’t plan for their inevitable demise. By ignoring their own invention and the market intelligence they’d gathered, they chose the path to oblivion.

Digital cameras were easier and cheaper to produce than film-based models. Barriers to entry tumbled, and a new wave of competition followed. When handset manufacturers bundled cameras with mobile phones, the die was cast.

After the patent royalties for Sasson’s brainchild ran out in 2007, the end came swiftly. By the time Kodak embraced digital, it was far too late. Failure to diversify would prove the company’s undoing – an epic leadership fail.

It couldn’t happen in your organization, could it? Well, that depends. Are you equipping your leaders with the skills they need to outmaneuver agile competitors and plan for disruptive technology? Are you supporting them every step of the way to make sure concepts stick? Or is your training in need of a revamp to keep your executives ahead of the curve?

In a fast-changing business world, there’s no such thing as certainty.

Is your training in need of a revamp to keep your executives ahead of the curve? 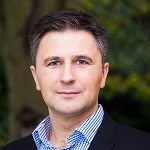 Matt McIntyre joined OnTrack International in November 1999. As head of learning and development, he has not only worked extensively throughout the U.K. but has also delivered crafted learning solutions across Europe, the Middle East and the U.S.