It was a rainy, cold February 20, the day after a snow moon and time for the renewal of the greatest rivalry in college basketball: Duke versus North Carolina. This tobacco road meeting was going to be special; Duke was ranked No. 1, and Carolina was in the top 10. Dignitaries like Barack Obama and Spike Lee were in the house, and tickets on the secondary market were going for over $2,500. The excitement and anticipation in the arena were palpable through our flat-screen TV. Less than a minute into the game, the most exciting athlete on the floor and the projected national player of the year, Duke’s Zion Williamson, blew out a sneaker and left the game with a knee injury. In that instant, the energy was drained from Cameron Indoor Stadium, the Duke bench and even our living room.

Since God gave us sports to use as a metaphor, consider your work team in this scenario for a few minutes. How do you prepare your team for the potential loss of a star player, a team leader, or a key product or service; the sale to or merger with a competitor; or any potential seen or unseen changes that could take you off course and drain your energy? A good approach is to set an extraordinary and compelling goal.

When a team sets this type of goal, it will not only stretch the team but will also return significant benefits to it and to the organization in the form of ROE (return on engagement) and ROI (return on investment). The team spends intensive time developing the goal and a plan to achieve it and then asks a key question to prompt scenario-planning: What can happen that will keep us from achieving our goal? The team brainstorms scenarios that could derail its plan. It outlines contingency plans for each anticipated disruptive event. When, inevitably, one or more of these anticipated events occurs, the team is prepared and has a plan is in place to begin with its plan B.

Set an extraordinary and compelling goal, and your ROE and ROI will be higher.

For example, a pharmaceutical sales team created an ambitious goal and plan to launch a new product. The team was beginning to execute the plan when it learned that the launch was going to be delayed by six months due to Food and Drug Administration (FDA) challenges. Rather than shelve the plan, the team proceeded to implement contingencies and partner with the marketing team to presell end aisle displays and other points of purchase for the drug, which was moving from prescription to over the counter dosage. The launch was even better than anticipated, and the first trimester report showed that its region was ranked first in the nation and 30 percent above the sales target. It remained in the No. 1 position out of 21 regions, and each team member received the President’s Club Circle Award that year, which was unprecedented. Team coaching gave them an insurance plan, and one of the leader’s key insights was the importance of the scenario-planning.

It is doubtful there was a contingency plan for a blown-out sneaker until the recent Duke-North Carolina game, though athletic coaches at all levels always anticipate and prepare for key player injuries. That’s why there is a bench. But how do you make sure each team member can park his or her emotions and become present to the mission and needs of the team? Aside from the Nike equipment check, which weighed on the mind of the entire squad, the Duke team, understandably, never seemed to found its rhythm.

Two years ago, the Philadelphia Eagles were in position to have their most promising season and make it to the Super Bowl when their quarterback and expected league MVP went down with a season-ending injury. The team had invested in the now-legendary Nick Foles as a back-up quarterback. If you follow sports, you know he led the Eagles to their first Super Bowl win.

Consider your game plan for 2019, and brainstorm even extreme scenarios. One team we coached included “an act of God,” and within weeks of the coaching project, Hurricane Katrina hit the area with a devastating blow to people, homes and businesses. This team represented one of the only health care companies in the New Orleans area to execute an emergency plan and help physicians recover files and critical information important to serving the region.

What are the smallest situations and events that could derail your team from reaching a goal or zap its engagement, focus and energy? How do you engage in scenario-planning? Build in contingency plans that will help your team members know their role in driving the game to sustain momentum.

Build in contingency plans that will help your team members know their role in driving the game to sustain momentum. 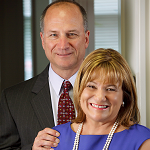 DJ and Barry Mitsch are the founders of The Pyramid Resource Group, the corporate coaching company, and master team coaches. DJ created Team Advantage™ to address a client’s urgent business need, and thousands of teams have benefited from this innovative team coaching process over the past 25 years.