Researchers and the general public usually argue about the differences between male and female leaders without reaching a consensus about who is better. Many believe that male leaders are better in that they process facts well and have more self-confidence and assertiveness. Others believe that female leaders are better at managing professional and business relationships, possess natural conflict negotiation skills, and are more intuitive and flexible in making decisions.

Assessing the key differences between male and female leaders is difficult without first addressing the question: What is leadership? Here are a few quotes that aim to answer that question:

These quotes reveal that both men and women are capable of effective leadership and that leadership itself is bigger than just being a man or a woman. It’s more about being both firm and delicate, confident and flexible, giving and taking, and so on.

In today’s continuously changing, competitive business environment, both genders need a variety of qualities to be able to adapt. Nowadays, traditional gender roles have been replaced by so-called “androgyny”; in other words, flexibility in social models is a must-have for leadership.

Flexibility in social models is a must-have for leadership.

Each of us possesses both sides, a priori, what Carl Jung called anima and animus — our feminine and masculine elements, which exist in an “active” or a “sleeping” form. The “masculine” side is based on such qualities as strength, competitiveness, assertiveness and risk-taking. The “feminine” side includes flexibility, effective speaking skills, care for team members, attention to details, maintaining brand, patience and intuition. Leadership requires both masculine and feminine qualities, along with an ability to maintain their balance and use them in the right place and at the right time. It does not involve gender but, rather, our ability to apply our potential to its fullest.

The first step in realizing this potential is to accept the fact that femininity and masculinity are not opposites but two independent characteristics that can be developed and coexist simultaneously. The next step is understanding which side is less developed and less realized. For example, a lack of masculinity generates too much compliance, hesitance and restrain, while a lack of femininity produces too much authority, control and self-centeredness. Awareness of our weaknesses and strengths converts clarity into personal growth directions and strategies. Finally, once both sides are developed, it’s important to practice flexibility. Moving forward, masculinity and femininity are two options that the leader can use and manage with appropriateness and timeliness.

We are living in a period where traditional gender roles have shifted. Gender is no longer a factor that determines success. Today, effective leadership is more due to flexibility and being multidimensional than to rigid patterns. In other words, to quote Warren Bennis, “The most dangerous leadership myth is that leaders are born — that there is a genetic factor to leadership. That’s nonsense; in fact, the opposite is true. Leaders are made rather than born.”

Effective leadership is more due to flexibility and being multidimensional than to rigid patterns. 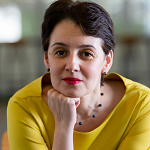 Dr. Naira Velumyan is an international coach and speaker on effective communication and building relationships. She is the founder of the Academy of Social Competency, which specializes in the training of self-confidence, communication and relationship-building skills for people all over the world, and she recently became a member of Forbes Coaches Council.