“When we first launched CNN in 1980, people told me that that was crazy, and it was sure to be a big failure” (Ted Turner, founder of CNN).

“We’ve had a price war, we had airlines trying to obliterate us … In the beginning, no bank would even give us a cup of coffee” (Tony Fernandes, founder of AirAsia).

“It was not easy. And every night that I came home, I struggled with those decisions because we always had a group of people inside PepsiCo who questioned those decisions … I remember going to Boston for an investor show and one particular investor, I mean, just took me to the cleaners, said, who are you, Mother Teresa? We are American. We eat chips and we drink soda” (Indra Nooyi, CEO of PepsiCo).

“There was a designer in LA who I looked up to. And I remember telling him about the idea. And he said something I’ll never forget. He said: ‘Brian, I hope that’s not the only thing you’re working on’” (Brian Chesky, co-founder of Airbnb).

Initially available in fewer than two million U.S. homes, today, CNN is seen in more than 89 million American households and over 160 million homes internationally. AirAsia is now Asia’s largest low-cost airline, with over 120 destinations servicing over 220 million passengers, and has been named the world’s best low-cost airline nine times in a row. PepsiCo, with a market cap of $155 billion, has a diversified portfolio of products that includes healthy options, and Indra Nooyi is in her eleventh year as CEO and was ranked number two on Fortune’s 2016 Most Powerful Women List. In its first four years, Airbnb served four million guests, and in its fifth year alone, it served seven million guests and is now valued at $31 billion.

Where would we be today if Turner, Fernandes, Nooyi and Chesky had listened to the naysayers and given up on their bold ideas? Comments like “the idea is never going to work,” “market conditions are terrible,” “it’s not practical,” “this is not the right time” and “that’s not how we do things around here” are often the soundtrack to new, unusual, bold and audacious proposals.

The reality is everything new has detractors. Behind the scepticism lie various motivations ranging from a lack of long-term vision to basic fears of losing control. For leaders, separating valid arguments from the invalid ones is crucial. Of course, it is very easy to fall victim to skilled doomsayers. How do you forge ahead and stay the course in moving a bold idea through its life cycle? To persevere against the glass-half-empty people and not give up, leaders need leadership energy.

Leadership energy is the force that prevents leaders from giving up amid the most formidable resistance, thereby keeping them firmly rooted and committed. In essence, it is the main ingredient of leadership, and it is made up of a strong conviction in a set of deeply held values and a values-based purpose.

Creators of a better future, like the leaders of CNN, AirAsia, PepsiCo and Airbnb, have crystal-clarity of purpose, driven by a set of values that prevents them from being distracted by negative commentators and from giving up. Perseverance is, in fact, what sets leaders and non-leaders apart. Think of any leader who created a better future against the odds, and you will find strong values plus a values-based purpose at his or her core. Getting used to cynics or blockers of innovation won’t be easy, just like riding in a stranger’s car or sleeping in a stranger’s home seemed unthinkable before Uber and Airbnb. However, when you seriously consider and wholeheartedly embrace the true meaning of leadership energy, most of the naysayer arguments fall flat, and you find deep intrinsic strength to stay the course.

The billions spent annually on leadership development are missing the mark, because they mostly teach on-the-surface skills and competencies. For a much bigger bang for its buck, the leadership development industry needs to shun backward-looking competency models, copycat role-plays and personality assessments and reorient itself toward helping participants uncover their long-lasting leadership energy – the kind that prevented Nelson Mandela from giving up even through 27 years of rigorous imprisonment.

The leadership development industry needs to reorient itself toward helping participants uncover their leadership energy. 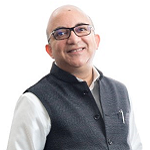 Author of “Open Source Leadership” and “Too Many Bosses, Too Few Leaders,” Rajeev Peshawaria is the CEO of The Iclif Leadership and Governance Centre. Prior positions include global chief learning officer of both Coca-Cola and Morgan Stanley and senior roles at American Express and Goldman Sachs. Rajeev provides speaking and consulting services globally to organizations in both public and private sectors.

The Power of Defining Success

4 Ways to Retain Talent During The Great Resignation