In 2018, the BBC Newsnight program covered allegations of bullying against John Bercow, the speaker of the House of Commons, based on a report that one of his aides had been diagnosed with PTSD after working for him for one year. The central tenet of my new book, “Corporate Emotional Intelligence: Being Human in a Corporate World,” is the existence of corporate traumatic stress disorder (CTSD), an anxiety disorder caused by persistent exposure to the low-level psychological stress and anxiety created by many corporate cultures.

In recent years, PTSD has become recognized as a psychological disorder that is caused by a traumatic violent event. Sufferers frequently relive the traumatic event, with extreme physical and emotional reactions triggered by seemingly normal situations. This reliving is often accompanied by an “if only” soundtrack, yielding further emotions of anger (“Why me?”) or shame (“Why didn’t I?”).

As we have learned more about trauma, we’ve come to accept another category, complex trauma, which arises from a series of what alone would be relatively minor traumas but that are traumatic when connected by repetition. These “small t” traumas are an accumulation of small but unsettling and distressing events that culminate in exceeding a person’s capacity to cope and a disruption of emotional functioning. While these traumas have no accompanying threat of physical harm, they are ego-threatening due to the individual’s feeling helplessness, along with guilt and shame.

In the corporate environment, people are frequently contending with a cocktail of such ego-threatening events: a challenging relationship with their boss, dysfunctional relationships with colleagues, the prospect of failing, conflicts at home due to work pressures, and anxiety over finances. Since any anxiety tends to be dismissed by the individual sufferer, who will rationalize the experience as being both common and normal, it triggers a cognitive shame reaction for “allowing” themselves to be affected. This avoidance only serves to make matter worse, adding to the accumulated effect of multiple compounded “small t” traumas and culminating in a case of CTSD.

In the corporate environment, people are frequently contending with a cocktail of ego-threatening events.

Exposure to traumatic situations does not always lead to PTSD. In a classic fight-or-flight situation, a surge of energy is vented through the physical exertion of the fight or the running away. Even in lower-level threat situations where a physical response would be inappropriate, if we find some physical outlet within a reasonable elapsed time – running, punching a bag, or screaming while playing or watching a football match – these responses allow us to dissipate the temporarily trapped energy.

If a person is unable to rid themselves of that energy, if their body holds the trauma as trapped energy because they “freeze,” then the trapped energy becomes stored in the cells, which then inflame. Even then, over time, the body can gradually release this trapped emotional energy, if the person is returned to normal life relatively quickly and with relative ongoing stability (i.e., love, companionship, respect from finding meaning and purpose), especially if they receive professional therapy.

But if the trauma is extreme, returning to a normal life of loving relationships and respect won’t be sufficient; the level of shame may be too great, or the brain won’t allow the person to forget. So, they continually relive the trauma, effectively retraumatizing themselves continuously and progressively, until something breaks. Even minor traumas are hard to recover from if the person goes straight back into a stressful ongoing corporate situation, such as a controlling work relationship, precarious financial circumstances or insecure employment.

Situations of extreme threat and danger trigger our most primal hardwiring. Our brains are flooded with stress hormones, our hippocampus shuts down, we experience a surge of cortisol for focus and of adrenaline for strength and speed, and our most basic flight-or-fight response ensures that we survive. When we experience “normal” trauma and trauma responses (fight or flight), the amygdala flicks the circuit breaker to the neocortex, instantly shutting down the hippocampus. The hippocampus is fired up again seconds later, when the amygdala throws the switch after the immediate threat has passed.

When the trauma is low-level and constant, the amygdala can’t decide what to do, and it short-circuits, fluctuating wildly between “on” and “off.” Veterans with PTSD have abnormally low levels of activity in their prefrontal cortex and unusually high levels of activity in their amygdala. They are, in effect, being constantly retraumatized by fairly innocuous daily events. They will re-experience their past traumas in the present, because the normal processing of events as memories has not taken place. In essence, PTSD is a memory-filing error.

Research has shown that when we suffer trauma and respond by fighting or fleeing, we minimize our risk of suffering afterward. When we freeze instead, we hold the trauma in our cells and end up feeling responsible for what happened to us.

The workplace is a crucible for creating trauma – the perfect petri dish for growing cultures of fear, anxiety, competition, isolation and threat. In “real life,” humans go into either fight mode or flight mode in the face of threat and rarely freeze, but in the corporate world, neither fight nor flight is acceptable or even possible. The body is left holding the undischarged energy surge and has nowhere to store it except healthy cells, which then become inflamed. Trauma is stuck in the body. Since this response is the usual one in the corporate world, my contention is that most people working in corporate environments are suffering from at least a mild form of CTSD and that some are suffering in the extreme. Since this condition is unrecognized, it is undiagnosed.

As decent (yet hard-pressed) leaders and managers, what can we do? We can’t change the system, and even if we wanted to, we’re not going to change cultures of corporatism overnight. However, we can transform our small part of them if we develop our corporate emotional intelligence (CEQ). With CTSD, emotional intelligence (EQ) is not sufficient, since EQ depends upon a calm and rational exercising of self-control. With CTSD, we are unable to calmly think through the pressure (threat) situation. We need a deeper intelligence to be able to access under pressure. We need CEQ.

CEQ is built on an awareness that our default reaction to pressure has become one of impatience. The merest situation can now trigger us into a threat response; our poor amygdala ascribes the same threat level to a colleague who is mildly miffed with us as it does to a spear about to skewer us. As a result, managers around the world have developed controlling habits that they are unaware of – directional, micromanaging, checking, manipulative, intimidating and dismissive behaviors. All we need to do to break these habits is to change our default reaction to pressure to one of curiosity instead of impatience.

The next time you feel your impatience and irritation levels rising, smile. Be curious; ask an open question rather than making a statement or asking a closed question. Be compassionate. It sounds simple, but try it for a few minutes in a normal work situation, and you’ll realize how much conscious practice you’ll need! The prize is transforming the moment so that people learn that they are the solution rather learning that they are the problem. If we can create working environments and relationships that are free of CTSD, we might just tackle the immense global challenges of our time.

The next time you feel your impatience and irritation levels rising, smile. Be curious, and be compassionate.

In the future, diagnoses of PTSD arising from working environments will no doubt lead to some interesting single employment law cases. What if CTSD became a recognized anxiety disorder? What if corporate boardrooms faced the prospect of class actions for CTSD? Now that might just get the corporate world to make fundamental change. 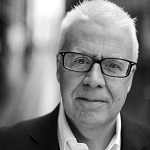 Gareth Chick’s 40-year corporate career has included successful spells as chief financial officer, chief executive officer and chairman in both public and private sectors, including private equity. As founder of Collaborative Equity, Gareth acts as consultant and executive coach to many CEOs and vice presidents around the world, pursuing his mission of promoting corporate cultures of shared ownership, shared responsibility and shared rewards.