The year is 2019, and the future isn’t quite what we thought it would be.

Don’t worry – this isn’t a scathing social commentary on the state of the world, just a commentary on what 1980s cinema promised us. We don’t have the dystopian cityscapes seen in the original “Blade Runner” (set in the year 2019) or the flying hoverboards from “Back to the Future Part II” (set in 2015).

Still, today’s technology would likely make our world unrecognizable to the people of the 1980s: smartphones, GPS and cloud computing – to say nothing of the coming fleet of autonomous cars and drones.

There’s a lot of concern about what all this technology means for the labor market, and with good cause. The more advanced artificial intelligence and machine learning become, the more workers with seemingly stable jobs could become displaced or redundant.

As a result, we have a choice: We can try to outperform machines, or we can recognize that automation is forever changing the way that work is done. This choice means finding another way to thrive in this new world.

We can try to outperform machines, or we can recognize that automation is forever changing the way that work is done.

Here is your guide to navigating the rise of the machines.

It’s often said that machines replace jobs, but in fact, machines replace tasks – typically the repetitive ones. Think about the ATM. As automated teller machines began appearing in banks, there was an immediate concern for the job security of human tellers. In reality, the ATM freed tellers’ time for new responsibilities like account sales and customer service.

We’re seeing similar trends today as roles like auditors and contract lawyers are replaced by programs that can review legal contracts faster and with greater accuracy. Their employers are investing in skills training to pivot those employees’ roles into account managers and client consultants.

Effectively, automation is freeing people to take on more complex roles involving attributes that machines can’t mimic, like a service orientation and emotional intelligence. By investing in our human skills, we will continue to serve functions that machines can’t replace.

Imagine you were alive in the year 1919, when many of the jobs we do today didn’t even exist. Think of web developers, airline pilots, geneticists, podcasters, hedge fund managers or digital marketers. Things change. Often.

According to a study from the World Economic Forum, while roughly 75 million jobs will be replaced by machines by the year 2025, nearly 133 million jobs will be created in data analysis, computer programming and service. It’s tough to predict the roles that new technologies might create, but we already have a strong idea of the skills that will be required.

While many roles will require technical skills like coding, there’s also a significant need for skills like problem-solving, adaptability and the ability to communicate complex ideas in understandable ways. Investing in these skills can help prepare you for the future, even if you don’t know how your role will change.

There’s a significant need for skills like problem-solving, adaptability and the ability to communicate complex ideas

Survival Rule 3: Tap Into Your Creative and Critical Thinking Skills

It’s been said that creativity is among the most fundamental of human qualities, a unique and defining trait of our species. While computers can beat people handily at chess, they aren’t particularly good at solving problems. Key skills like creativity and complex critical thinking are tough for computers to replicate, which gives us another edge over them.

A computer will only do the things it’s been instructed to, so when faced with a novel challenge, it will just run through everything it knows and then run out of ideas. Computers also struggle to make grounded but subjective choices.

Your advantage is the ability to formulate creative strategies. It is a computer’s limitations that make careers like learning specialists, sales managers and risk evaluators relatively safe from elimination.

Your advantage is the ability to formulate creative strategies.

Survival Rule 4: Be Prepared to Have Multiple Careers

Automation and AI are changing the landscape of work in meaningful ways. Compare today’s manufacturing output with that of 1984 (the year “The Terminator” premiered, incidentally). According to the U.S. Federal Reserve, the United States produced twice as many manufactured goods in 2018 as it did in 1984, but did so with one-third fewer workers.

No matter how safe we think our job might be, machines are rapidly changing the labor market. Trends indicate that we’re likely moving from a single career to more episodic career, marked by periods of work and transitions across industries. As certain workforces shrink (particularly in industries like retail or manufacturing), the HR and L&D staff that support them will shrink as well. L&D professionals might find themselves moving between internal HR functions, into industries they’re less familiar with or even into the growing gig economy.

So, how do we stay ahead of this disruption? The answer is continuous learning. Long-term growth and development puts you in the best position to avoid the irrelevance of leg warmers and lava lamps, effectively pivoting from one career to the next.

Long-term growth and development puts you in the best position to avoid irrelevance. 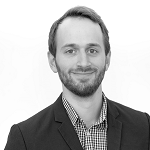 Rory Sisco is a management consultant with a background in I/O psychology. As a solutions manager at Mind Gym, he works with organizations to develop large-scale, global programs that help individuals thrive at work.

How to Drive Learning and Knowledge-sharing in a Remote Workplace