Thanks to the coronavirus, we are all suddenly working from home, which has caused a fair amount of consternation. Sharing small living spaces with small children can mean that your employees’ carefully curated personas of professionalism at work is interrupted by the sudden appearance of a screaming infant on a Zoom call. I was on a call recently when I was mystified by a leaping and darting white light behind my interlocutor. It turned out to be a light sabre. The background to our call was apparently inter-galactic war. Soon, I was paying more attention to the Luke Skywalker-wannabe than I was to the substance of the call.

How can you prepare employees to handle the new rigors of remote communication? The main issue to understand is that the virtual communications hierarchy needs to be overturned. Most knowledge workers in the pre-coronavirus era communicated first and foremost in text-based forms — email, text messages, and office productivity tools like Slack. Then, they might have hopped on a weekly team audioconference. Finally, there might be a rare video call.

This hierarchy needs to be turned on its head. Workers need to start using video calls primarily, to be followed up with phone calls sparingly and least of all text-based communications. The reason for this switch is that while we believe our emails are understood and that we understand incoming emails most of the time, the actual accuracy rate is 50%. In other words, roughly half the time, your workers have inadvertently created inefficiencies, inaccuracies, misunderstandings and downright hostility. The process of untangling this miscommunication takes, on average, six additional emails.

Video calls reduce the error rate, because you can see the facial expressions of the sender of the message. You have the opportunity to follow up immediately and correct any misunderstandings. And you can strengthen the relationship with the exchange of body language — an important consideration in the era of social distancing.

Each level of the hierarchy has its challenges, to be sure, but with a little practice and some guidelines, workers can learn to use video conferencing with aplomb. Here are some helpful tips.

Video calls reduce the error rate, because you can see the facial expressions of the sender of the message.

At the base of the hierarchy, text-based communication, the biggest issue is lack of clarity about intent. We, as humans, care most of all about each other’s intent toward us. Is that co-worker going to help me or make my life harder? Did Jim mean to be nasty or nice when he made that comment about my suit? Is the boss disappointed with my report? We care less about the precise wording of an email and more about the attitude behind it. But, as humans, we are also often unclear about our intent — or unwilling to express it. As a result, we are left guessing, and when we do, we assume a negative bias, because in evolutionary terms, we are better playing the odds of survival by being negative.

As a result, all virtual relationships, but especially text-based ones, degrade over time. Keep your text-based communication as strong as possible by using emojis, putting your intent in the header and asking for clear actions at the end of the email.

Conversational handoffs on audio conferences and phone calls are stressful because the usual face-to-face clues are missing, and intent is less clear. Phone lines (including digital ones) compress the voice signal to a narrow bandwidth. The emotional information in the human voice is carried by the undertones of the voice, not by the words themselves. With the undertones largely removed by compression, it is much more difficult to identify whether someone is angry, happy, stressed or sad.

Improve your audience conferences by expressing verbally your intent: “Jane, I loved that remark. You really have tons of insight when it comes to space burgers.”

In terms of the amount of information that comes through the signal, video conferences are the best form of remote communication, but they still have limitations. While we can see facial expressions and some hand gestures, the unconscious brain is puzzled by the image it sees on a video conference. The two-dimensional image is, perhaps, two or three feet away, but the people in the images are smaller than they should be at that distance.

As a result, the sixth sense known as proprioception, which keeps track of where all the people we can see, including ourselves, are, is baffled and goes into panic mode trying to sort it out. Movie directors for TV and film have understood this reality; they “dress” the set with cues about how far away things are so that your brain relaxes and enjoys the movie. You can help your viewers by providing depth perception clues such as pictures on a wall behind you, familiar object such as plants, or other office items carefully positioned behind and beside you.

Keeping in mind the virtual communication hierarchy and using it to your advantage will make your and your workers’ communications more effective, less stressful and more accurate during this difficult time of self-isolation.

Video conferences are the best form of remote communication, but they still have limitations. 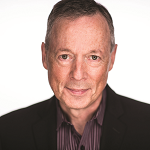 Dr. Nick Morgan is one of America’s top communication coaches and thinkers. His clients include leaders of Fortune 50 companies, and he has coached people to give Congressional testimony, to appear on the Today Show and to take on the investment community. He is the author of several acclaimed books on public speaking and communication, including his most recent book, the Washington Post bestseller “Can You Hear Me?: How to Connect with People in a Virtual World.”