COVID-19 has turned many, if not most, of our work teams into virtual teams — which means changes in work environment, communication practices, meetings, technology platforms and applications. Over three months into the “new normal,” we now take many of those shifts for granted. Perhaps we are getting used to them.

Since we don’t know when or how much we’ll return to the in-person workplace, here are some considerations:

Now is probably the perfect time to look at your team’s interpersonal operations. What can you do to maximize cohesion?

Danny Molnau, a consulting director at Vizient, Inc., defines team cohesion as “the extent to which team members stick together and remain united in the pursuit of a common goal. A team is said to be in a state of cohesion when its members possess bonds linking them to one another and to the team as a whole.” Team cohesion provides successive links between higher self-esteem, increased team morale and improved team performance. Who isn’t looking for better team performance?

When people work remotely, their cultural variations involve specific local factors. These variations require more than global “cultural awareness” that followed “globalization” as a buzzword of the 1980s. Instead, they require cultural all-awareness, which includes cultural concerns of all sizes and shapes.

When they work apart, team members do not become as quickly acculturated as a team. By developing awareness of all the cultural uniqueness each individual brings to the table, the team can increase engagement and harmony.

The following activities build an understanding of each team member’s personal culture, which builds a culture that identifies and strengthens the team:

Small talk helps new team members become comfortable with their colleagues and provides seasoned team members with reassurance and reaffirmation of team identity. Small talk can take the form of:

Being on camera creates personalization and improves focus.

If your team has members in different time zones, schedule meetings at a variety of times to ensure fairness.

By developing awareness of all the cultural uniqueness each individual brings to the table, the team can increase engagement.

Different people treat time differently, especially in a remote workplace. Online meetings often seem longer than they would if they were in person. Consider having three one-hour meetings on consecutive days rather than one three-hour meeting, for example. Don’t linger on individual agenda items longer than is warranted.

Learning about each other’s cultures helps team members respect one another.

Conversations, whether among several people or between two individuals, are the primary element of team success. Conversation is the human element that electronic platforms make viable for a remote team. Even with such platforms, though, working remotely strains a team’s ability to have effective conversations.

Here are three sets of recommendations that minimize those strains on conversations:

It will build cohesion if everyone agrees to the following “virtues” during all conversations and meetings:

The following mechanics should be elements of every team meeting and require continual attention and effort:

Feedback should not be kept to manager/employee conversations. All feedback is valuable: manager to employee, peer to peer and employee to manager. Feedback will add to team cohesion if it is:

Respect goes hand in hand with trust, authenticity and credibility. The more we demonstrate respect for our team members, the more we build those traits, all of which contribute to team cohesion.

“You did a good job!” is a respectful comment, but if the way we show respect varies and is more creative, each instance becomes more meaningful and creative. Consider:

As these approaches to remote team cohesion increase team members’ engagement, unity and commitment, there will be an undeniable increase in productivity — and no one denies the value of increased productivity.

Want to learn more? Watch this recording of Tim’s presentation, “Build Your Remote Team’s Cohesion, Now and in the Future,” at our TICE virtual conference “Understanding and Developing Your Remote Learners.”

All feedback is valuable: manager to employee, peer to peer and employee to manager. 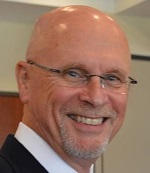 Tim Wright is a thought leader in workforce transformation working for Dell Technologies, where he collaborates with stakeholders, leaders and team members to identify transformation strategies that build and expand digital mindedness among the workforce. His career has ranged from teaching junior high school language arts to serving in an executive role with a startup communications company. Tim loves every step of his mediocre golf games. He writes poetry (one book), a spiritual blog (one book) and a 50-year-old journal (many volumes!).