When trying to influence others, we often focus on what we say or do, but we might also think about how we say it. Body language, facial expression and vocal tone are also important aspects of influence — but they also are only part of the story. It’s critical to consider the hidden aspects of influence in order to increase the chances of success: your bases of power and the other person’s sense of psychological ownership.

The Bases of Power

Imagine that you recently watched your boss give a presentation and thought that she could improve her presentation style. Should you give her that feedback? To answer that question, ask yourself how much power you have in her eyes.

Expert power comes from the amount of respect the other person has for your competence, intelligence and knowledge. The more expert power you have in the other person’s eyes, the more likely he or she will be to follow your suggestions. Expert power can have a “halo effect”; if your boss is impressed with your ability to negotiate with vendors, for example, then she might be more likely to listen to your advice on her presentation skills. Even though the two areas are not related, the respect that she has for your competence in one domain can spread to other domains.

If you do not have much expert power with your boss, focus on mastering your job. Depending on the scope of your role, it might not be realistic to try to excel at everything, but if you can excel in a few specific areas, the halo effect will kick in. Developing a reputation of excellence in a particular aspect of your role will go a long way toward making you more influential across the board.

The more expert power you have in the other person’s eyes, the more likely he or she will be to follow your suggestions.

Referent power comes from the other person’s desire to maintain a good relationship with you. It implies more than just liking; it implies that you are highly valued — maybe even seen as a role model or placed on a pedestal. Referent power is based on your personal qualities, such as integrity, trustworthiness or warmth, as well as on the other person’s interactions with you and experience working with you.

The amount of referent power that you have can vary depending on who the other person is. Having referent power with your boss means that you have an excellent working relationship and that she cares about keeping that relationship positive. If you give her feedback, then she is likely to listen to it — not because she thinks you are an expert but because she wants to make you happy by showing that she is listening to you.

If your referent power is lacking and you need to fix your relationship with your boss, think about the reasons the relationship is poor and what you can do to change it. If the only solution involves changing your boss’ personality or habits, things are unlikely to change, because you cannot force her to change who she is. Instead, focus on what you can control: your own attitude and behavior. By changing your them, you can change the relationship dynamic and, in the long run, possibly shift your power in a positive direction.

Imagine your boss tasks you with implementing a new internship scheme that he designed. After the first year of the program, you discover several weaknesses whose solutions seem obvious. When you try to make those changes, however, your boss rejects them and seems uninterested in discussing the issues further. This resistance, combined with the fact that your boss was the one who designed the program, suggests psychological ownership.

Psychological ownership occurs when someone feels that an issue, process or object is part of his or her identity. The degree of ownership can vary, with greater feelings of ownership resulting in greater resistance to change. If you suspect that psychological ownership is the barrier blocking the other person from hearing your suggestions, slow down. Rather than trying to push through your changes, take time to bring them on board. Show appreciation for what they have done, and give them a say in whether and how to make any changes. This will give them a greater sense of control, making them more likely to consider making changes. Slowing down also means making smaller, incremental changes — which are likely more acceptable to the other person — rather than large changes, which might appear to destroy their creation.

With the internship program, you could slow down by taking a more evidence-based and collaborative approach. Rather than assuming you know what changes you need to make, gather as much data as possible from the interns and their managers. Present the data in a balanced way, highlighting the successful aspects of the program and any positive feedback. Then, having shown appreciation, share the more critical feedback, and jointly develop ways to address those issues.

Having a clear set of objectives for the program will help steer the conversation. Your boss might want to ignore the critical feedback (e.g., interns felt they did not learn much), but if it links directly to the objective of the program (e.g., to help interns learn and grow), it is easier to argue for a change.

Influencing others can be challenging. Be aware of the hidden aspects of influence, and take steps to boost your bases of power and to understand the perspective of the other person. With practice, you will eventually increase your power bases and become more influential.

Focus on what you can control: your own attitude and behavior. 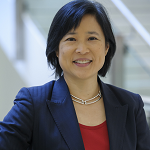 Connson Chou Locke, Ph.D., is senior lecturer in practice at the London School of Economics and Political Science (LSE), where she teaches leadership and organizational behavior. Her book, “Making Your Voice Heard: How to Own Your Space, Access Your Inner Power, and Become Influential,” will be published in the U.K. in May 2020 and the U.S. in January 2021.