When people think about networking, they usually think about attending events for new business opportunities, improving their relationship with a current client or finding a new job. Internal networking or coalition-building can be a different animal. It is one thing to work the room and mingle gracefully. It is quite another to be a skilled orchestrator of the people and resources within arm’s reach.

Internal networking is an important and effective tool for training professionals wishing to take the next step up in their organizations. When done properly, being connected within your own organization provides meaningful benefits.

Internal networking is an important and effective tool for training professionals wishing to take the next step up.

Just because you work for the same company does not necessarily make the task easier. This article uses a fictitious case study to give you some ideas about how to become a better internal networker.

Andy is the learning and development manager at the TechUSA office in Central Europe. Though he has been successful in his role, he wants to gain traction with upper management to secure more resources for his team, and to do so, he must reel in a big whale in his organization.

He has an upcoming trip to the headquarters office in Silicon Valley to meet with his peers. His internal networking targets, however, are further up the food chain. Andy wants to land a meeting with his boss’ boss, the chief learning officer, Carlos. His current boss, Bianca, is new to the organization and lacks the social capital to broker such a meeting. Another viable target is Meg, the executive vice president of human resources (HR) and Carlos’ peer. How can Andy create a link to these two big fish? He works with his coach to develop the right strategy, tactics and timing:

The first step in this kind of networking is to understand the needs of your target. It is not only important to score a meeting but also to use your time and theirs wisely. Andy does some digging and connects with his contacts throughout the organization to help him answer the following questions about Carlos and Meg:

The answers to these questions have the underlying premise of providing direct value to the other person. For example, Andy learns that Carlos has been experiencing challenges due to the General Data Protection Regulation (GDPR) from the European Union. Meanwhile, Meg’s team wants to expand the size of other HR offices around the world without forgetting about the Silicon Valley office. Both are golden opportunities for Andy to offer his own expertise in dealing with GDPR and his team members who would welcome the chance to gain international experience working in the U.S.

Once Andy has this valuable information, he is ready to make contact. But how? Coalition-building is difficult; when people go to networking events, they are in the mood to meet and connect. When it is 11 a.m. on Wednesday and someone has a packed schedule and full to-do list, he or she tends to put relationship-building on the back-burner. A cold email has a low success rate and is not optimal for making a good first impression, which is why Andy plans to connect with Carlos or Meg in person, at a meeting they attend together, in the company canteen or even in the hallway.

Before making contact, Andy packages his message into a hallway pitch. Unlike of a 60-second, rehearsed elevator pitch, a hallway pitch is a quick conversation-starter that wins attention, such as a comment on something the target has recently said or written in an internal newsletter or press outlet. If Andy can present solutions or offer pointed insight during a chance meeting, he would leave a favorable impression on Carlos or Meg. The clear advantage of internal over external networking is that people within the same organization have common struggles that afford a common denominator for relationship-building.

Other avenues to “run into” some of the top dogs in your organization are at conventions and trade shows. At the very least, Andy can stop by the TechUSA booth, say hello and gain that critical top-of-mind awareness.

Social media also can be a tool for internal networking. Andy and Carlos work at the same company, so a LinkedIn invite is always fair game. He could try connecting on a more personal level with a reference to shared interests based on what he’s observed on LinkedIn. Whatever he says in his message to Carlos, his communication must be authentic.

One final and proven strategy is to network with the person’s gatekeeper. Carlos’ executive assistant wields a great deal of power, as he controls the schedule as well as the flow of information in and out of Carlos’ office. For example, in a LinkedIn article, Robin Koval, founder and CEO of Truth Initiative, said about job candidates’ interactions with her gatekeeper:

Of course I expected folks to be nice to me – I was the CEO. But once they left my office, I would always ask the receptionist whether the candidate had greeted them nicely, thanked them for offering a beverage or made small talk while waiting. If the person was not nice, they failed the test, and didn’t get the job no matter how talented they were. You can train skills, but it’s much harder to train character.

Becoming more connected within your organization can be a difficult fishing expedition, but to catch the whale, the investment is worth the risk. Despite how it differs from external networking, a few principles remain the same: Do your homework about the people you wish to connect with, provide tangible benefits to them and be authentic.

Give coalition-building some time, as you would waiting for a fish to bite. When it does, it might just be a big whale.

Do your homework about the people you wish to connect with, provide tangible benefits to them and be authentic. 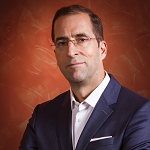 Paul Renaud is an ICF-credentialed executive coach, networking specialist and sought-after public speaker focused on helping executives at all stages in their careers optimize their opportunities for peak performance. To learn more, visit www.paul-renaud.com.