We are often confronted with conflict situations in which we are not sure what to do. Often, we hear the suggestion to “let it go.” What does “letting it go” mean, exactly? And when is it better to let it go than to continue to engage?

In our society, letting go, meaning “giving in,” is often perceived as weakness, but doing it correctly (as well as knowing when not to) is a valuable leadership skill. Sometimes, rising above an interpersonal workplace conflict will advance projects, set an example for inclusiveness, and unite teams and the organization as a whole. It can be a form of strategic thinking that focuses on bigger objectives and engenders followership.

Letting it go also comes with psychological and emotional implications that all parties need to recognize. For example, it can create a sense of vulnerability or the impression that you’re selling out your principles. But it doesn’t have to.

Letting it go can set an example of being less dogmatic that can catch on. Despite the implication that one party is somehow weaker, conceding a point is not necessarily a binary or mutually exclusive outcome. Both or all parties can be “the bigger person.”

Sometimes, two people enter a negotiation in which one wants something much more than the other. For example, you don’t care which vendor you use for a particular project, but a member of your team has strong ideas and opinions based on research. In this case, letting go would cost you little while empowering your team member. On the other hand, if two people are in a situation in which both want something and come up with a third option, they can both feel that they were “bigger people.”

In both of these cases, neither party takes the conflict at face value. Instead, they find a better solution by appealing to a higher value and longer-term strategic purposes. When this type of resolution occurs, the results are often more strategic, successful solutions. In this way, letting go can invite greater diversity of thought, enable teams to come to better and more collaborative decisions, empower others, and enhance interpersonal engagement.

Letting go primarily relies on your ability to resist acting on your initial reaction and gut instinct. That type of quick response is a survival mechanism, but when we are emotional and feel that our values are being challenged, it’s wise to step back and look for the greater good or greater value. We need to look toward the bigger moment rather than just seeing the one we’re in and to act in line with our higher-level values rather than the ones being argued in the moment.

Letting go primarily relies on your ability to resist acting on your initial reaction and gut instinct.

When “Let It Go” Is a Problem

Sometimes, people think they’re being the bigger person when what they’re actually doing is avoiding conflict. They use it as a justification for not addressing an important issue. For example, let’s say two colleagues are arguing about how to proceed with a project. If the team leader says he or she does not want to “get in the middle” but actually decides not to step in due to a longstanding avoidance of conflict, it would not be a good use of letting go.

When acquiescence is used as an excuse or as justification to put down another person rather than a values-based decision, it becomes passive-aggressive. It can also leave people with a feeling of resentment and anger toward themselves or others.

This form of passive aggression should not be confused with conflict retreat, a useful gambit when a person can’t achieve his or her goal and it is actually better to walk away. In this case, letting go is a strategic retreat, especially when there is something better at stake in the long run.

When to Be Resolute

Being resolute when you can’t compromise is important. When it’s certain that one position makes the most sense and alternatives will have clear negative effects, it’s both ethical and professional to stand firm and even, sometimes, bring in others for support.

In addition, not everyone will participate in a discussion in good faith; there are always people who are completely self-serving and self-focused. For them, it’s not about striving for the high ground. They assume they are correct, and they work from there. For them, letting to is not about values but about ego.

Finally, we sometimes have to stand up to a bully rather than thinking, “I’m going to rise above this and walk away.” For example, you may need to address the person’s bullying behavior if you see that it will not change on its own.

Your managers can teach and model strategic compromise in high-level conflict resolution. People who are good at letting go demonstrate these traits:

Knowing when to let go (and when not to) is a leadership skill that everyone can develop, and it’s valuable to the organization, too: One person might have an answer, and it might be the best answer at the moment, but to help others commit to and engage in the process, more discussion and discovery is helpful. This process helps others learn.

Knowing when to let go (and when not to) is a leadership skill that everyone can develop. 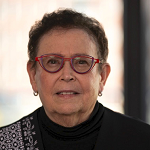 Sandra L. Shullman, Ph.D., is a psychologist and partner in the Executive Development Group.

Registered Apprenticeships Can Help Ease the National Shortage of Tech Talent, According to AIR and CompTIA