Imposter syndrome is widely recognized in the workplace. The term, originally coined in the 1970s to describe the experience of high-performing women who felt like they were “frauds,” is now recognized as something that professionals from both genders as well as minority groups experience.

When imposter syndrome was first identified by researchers Pauline Clance and Suzanne Ament Imes in 1978, it was groundbreaking. Women finally had a term to describe their experience; it was validating to know that other women in the workplace were experiencing this sense of being “an imposter,” too.

But it’s hardly surprising that these women found themselves feeling like imposters: They were.

At the time, women were not well represented in the workplace. In fact, they barely inhabited any senior leadership positions. It wasn’t until 1972 that there was a female named chief executive officer of a Fortune 500 company. Still today, in Australia, there are more men named John and David in CEO and chair positions than there are women (Liveris, 2018).

In the past, women felt like imposters because of the work they were trying to take on, what had been up until that point, a man’s job. Of course they got the sense that they weren’t supposed to be there. They undoubtedly felt like they had to pretend to be different from who they were, leading them to question themselves and feel insecure.

But similar to diagnoses like hysteria or nervous disorder, it’s easy to see that imposter syndrome was the pathologization of a woman’s experience. Their experience was counter to the patriarchal values society held and continues to hold; that confidence and self-assuredness is akin to being competent. Instead, the emotional reaction that women were having was pathologized and turned into a problem that they were made responsible for. It was their fault that they felt like imposters, not the fault of the system in which they found themselves, and something they needed to fix.

Feeling like an imposter or that you’re not supposed to be in a certain position when you are the only one who looks like you in a room is normal; feeling self-doubt when you’re constantly given feedback that you should be different to what you naturally are, is normal. Feeling like you are going to be questioned, not taken as seriously or overlooked when you have seen others being treated differently to you, is also normal. This explains why so many people who identify as being in the minority also experience imposter syndrome. They’re coming up against a culture of a system that was not originally designed with them in mind.

The fact that many men have now come forward and said that they too feel like imposters, shows that this experience is not the fault of women or minorities. It instead points to a potentially mis-described phenomenon. Rather than being a syndrome, we can instead see that it’s a normal reaction to the environment in which individuals find themselves.

It’s important to note that women are disproportionately affected by things that happen at work. This is because they have been socialized to care about what others think of them, and to be sensitive to the cues, rules and norms that still exist today. While men are much more likely to externalize and blame others or factors outside of themselves for why they feel the way they do, women do the opposite.  Women are tremendously good at internalizing messages, cues and social signals, leading them to blame themselves for the way they feel, failing to recognize the context in which they feel it.

But the context and the systems in which we work have a lot to answer for. This is not a new revelation, but for many women, taking this into account is.

By recognizing the context, we help to shift from blaming ourselves and internalizing the way we feel, to instead externalizing our experience. Shift your thinking from, “There’s something wrong with me because I feel like this,” to “It’s understandable that I’m feeling anxious in this context,” to give rise to a much more balanced approach to understanding our experience, normalizing it and responding appropriately.

Next time you are feeling like an imposter, or trying to support someone who is, have them answer the following questions:

By recognizing the reasons for why we feel the way we do, we can validate ourselves and shift out of the unhelpful narrative that “there is something wrong with us.” This empowers us to acknowledge the context we live and work in, rather than being limited by it; and frees us up to offer the unique, diverse and often much needed perspectives that are missing at the tables of power and decision.

What would it be like to shift out of the doubt, and instead focus on what you are capable of? 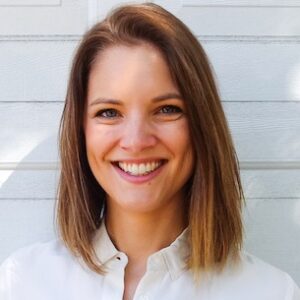 Dr. Kassandra Gratwick-Sarll is a clinical psychologist and co-founder of Tend. Tend is a psychology-based organization, founded to empower women to step into their brilliance and navigate the barriers that hold them back in work and life.