Karen Fine Brasch read these words above the entrance to the Naval Officer Candidate School and flight school when she arrived as “a fish out of water,” her hair hanging halfway down her back. As a self-described Texas co-ed, she had a lot to learn. She felt inadequate academically and physically. When she couldn’t cross a wall that was a part of a required obstacle course, she and a few other female candidates recognized that the concrete wall in the barracks shower was about the same height. Every night after lights out, they practiced running at the concrete block wall until they pulled themselves up and over it.

Brasch was one of the first women to fly in the U.S. Navy. Physical obstacles were ultimately the least of her concerns; over a career in the Navy (she retired as a commander), she learned the truths of that saying emblazoned on the gates at Officer Candidate School.

This quote refers to the metallurgical process. Tempering is a process of toughening iron-based alloys. A pure metal will bend under the heat, but the alloys become stronger.

“Adversity is the first path to truth,” said poet Lord Byron, suggesting an understanding expressed as well by Irish statesman and philosopher Edmund Burke, who admitted that “adversity is a severe instructor” but that it “strengthens our nerves and sharpens our skill … it will not suffer us to be superficial.”

No parents wish adversity on their children in any specific way, but there are few who make it far in life without the painful understanding of adversity and its hard-earned benefits. Adversity teaches by necessity. Faced with a situation we are unable to control, we are remarkably able to find ways to work within sometimes undesirable constructs. Under the dictate of necessity, creativity flourishes. At the same time, the superfluous falls away.

In the mid-20th century, a group of mostly French artists, writers and mathematicians calling themselves Ouvroir de littérature potentielle (Oulipo; “workshop of potential literature”) searched and took on constraints, understanding the benefits those constraints had on their creativity. “I set myself rules in order to be free,” said the late novelist and Oulipo member Georges Perec.

What does this have to do with adversity? Perspective. In nearly every interview I conducted over four years of researching and writing “The Grit Factor,” the leaders who succeeded in challenging roles, despite the odds, all had something in common: They were able to view difficulty as opportunity. Like the Oulipo artists, they understood that they had to make a choice about how they would consider the difficulties they faced.

But adversity is not met only by mindset. Successful people understand that they must meet adversity with the triangle of understanding the past, engaging in the present and looking toward the future. To do so, they need to commit, learn and launch.

Commitment is doing the work to understanding your past — connecting to and understanding your own story and doing the work to connect to your core purpose. This is introspective work that everyone must do first It can include exercises like remembering examples when they have faced and overcome challenges as well as recalling the sources of strength they have found for support.

Learning, or engaging in the present, is exactly what Karen Brasch did when faced with the literal obstacle in her path. She looked for creative solutions to her problem, she took action in the areas where she had some agency and she took responsibility in the areas where she had control. Notably, she did so with others. Identifying how to connect to others in challenging times is another critical component of success, whether it is in a supportive peer relationship or extending a hand to help. People in this phase should focus on the art and skill of listening, which means practicing to ask, pause and listen.

Launching means looking toward the future. In what is known as the Stockdale paradox, named for Vietnam prisoner of war Admiral Stockdale, people who survive and even thrive through change look to the future with grounded optimism. Optimism without bounds kills people, Stockdale reported after his time in prison. When prisoners weren’t released by the date they had in mind, they eventually died from heartbreak.

Grounded optimism, on the other hand, requires faith that there will be an end to the darkness, even if the specifics are unknown. This kind of optimism might mean looking forward to an event in the future, safely in the realm of possibility.

The combination of mindset and tactical connections to past, present and future — beginning with commitment, moving through to learning and then launching into one’s leadership journey — is the prescription for not simply weathering adversity but even tempering it, in the way it tempers us, helping us to script new stories that we will use as sources of strength in the challenges to come.

Grounded optimism requires faith that there will be an end to the darkness. 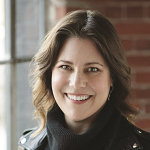 Shannon Huffman Polson is founder and chief executive officer of The Grit Institute, a leadership development organization dedicated to ethical, people-centered leadership. She is one of the first women to fly the Apache helicopter in the US. Army and a veteran of the corporate world as well. Shannon is the author of “The Grit Factor: Courage, Resilience and Leadership in the Most Male Dominated Organization in the World” (Harvard Business Review Press, 2020) She holds a master of business administration from the Tuck School at Dartmouth and a master of fine arts.

Advancing Pervasive Diversity in the Workplace