I am eternally five years old.

Although my wife would wholeheartedly agree, what I mean is that my attention, like that of most learning and development (L&D) professionals, is obsessively drawn to the “next big thing.” In this industry, we tend to look toward the future and see new technology as a way to help learning evolve to the next level. Sometimes we fail, and sometimes we succeed (for example, mobile learning).

With virtual and augmented reality (VR/AR) becoming more mainstream, the next big prospect in the learning technology market is mixed reality.

What is mixed reality training? The answer to that question is still being worked out, but it’s a combination of both virtual and augmented reality. Also referred to as “hybrid reality,” it’s where real and virtual objects interact with each other. In virtual reality, our world is replaced with a manufactured virtual one. In augmented reality, our reality is augmented, or enhanced, by virtual elements that are projected as an additional layer onto our reality. Mixed reality combines both into a seamless, real-world/virtual-world mix of science fiction dreams.

Imagine the possibilities! Learners could place a headset on their head and interact with the world around them in a new way. Things that don’t exist in the real world can exist in mixed reality, and learners can seek them out and interact directly with them. Platforms already available on the market enable learners to interact with lessons in a mixed reality environment. They can interact with objects they would never be able to in real life, manipulate and learn from 3D models in the classroom, and share experiences in real time with their fellow learners.

Imagine having a virtual tea party or building Lego toys with your children (virtual Legos don’t hurt your feet as much when you step on them!). That shared experience is what differentiates mixed reality from virtual and augmented reality.

Shared experience is what differentiates mixed reality from virtual and augmented reality.

The workplace is a prime location for mixed reality. Here are just a few areas where mixed reality could have a major impact on learning and development:

Highly technical training, such as in the medical or engineering field, often requires a high level of simulation due to the risk involved in real-world application. You wouldn’t recommend that a medical student perform medical procedures on actual humans when there is a high probability that it would fail, causing the patient to suffer or die. Medical training requires that learners practice surgical procedures in a safe, clean environment where failure is an option.

Likewise, failure in engineering training can often have major consequences. It’s also difficult to gather a large group of learners on site or easily replicate a large structure to practice on. Mixed reality can provide a safe, replicable, fail-friendly environment for learners to practice new skills over and over. It enables them not only to interact with a virtual element but also to feel as if they are doing so in a real, physical environment.

Another benefit is that learners can interact with one another and create a shared learning experience. In the mixed reality environment, one learner can demonstrate to another how to perform a task or point out something other learners may not have noticed.

A company once wanted to conduct training on maintaining and repairing a conveyor belt system, but shutting down that conveyor belt would cost thousands of dollars per minute. There was no chance the company was going to shut down the conveyor, so its training team had to find a creative solution.

Mixed reality can help organizations replicate learning in places that training cannot feasibly occur. Combining both the simulated conveyor belt with the real-world experience of the warehouse, all while interacting with multiple learners, creates an environment that not only enhances learning. It also keeps the business running full steam ahead.

We tend to focus mostly on learning environments, but there are many other practical workplace applications for mixed reality. Imagine a team meeting, held via mixed reality, to demonstrate a new product. Mixed reality enables team members to interact with one another, examine and manipulate the product, and participate in training on the product without having to leave their location.

On a simpler level, with mixed reality, presenters can deliver presentations to viewers’ headsets. They can point to and annotate the presentation and even manipulate certain elements with their hands in the air (like Tony Stark working on his computer).

As with any new learning technology, there’s a time and place for mixed reality. We have to be mindful that we are using the right technology and not using something for the sake of its “coolness.” At Caveo, we try to focus on what is right for learners, what is right for the organization and what delivers the best performance-based training. Mixed reality training gives us the opportunity to add a new modality to our training toolbox and can help organizations move that needle forward.

Editor’s note: Don’t miss our infographic on experiential learning, which shares insights from learning leaders like this one.

Mixed reality training gives us the opportunity to add a new modality to our training toolbox. 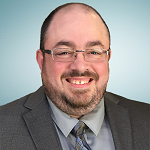