“There is nothing as powerful as a newborn child to make us reflect on what the future looks like” (Vidya Krishnan).

It’s 6 a.m., and our newborn baby is finally asleep. In the next room, our three-year-old daughter is waking up with more energy than gamma rays. I tell my wife to catch some sleep while I prepare Ana for the day ahead. As I am watching her during breakfast, I can see learning taking place at every single moment; whether she is reading a book, playing with her toys or seamlessly navigating through apps in the iPad, it’s easy to see that her generation is learning in a different way.

Among the questions and worries that naturally come with fatherhood, I am also entertaining thoughts around education, saving for college, etc. But should I really be concerned about these things? The technology advancements that the Alpha generation (born after 2010) will benefit from will create a completely different learning experience and change the way knowledge is acquired. What will it look like?

“Alphas have been raised as “screenagers” to a greater extent than the fixed screens of the past could facilitate” (Mark McCrindle).

Generation Alpha is the first generation entirely born in the 21st century, and there are approximately 2.5 million Gen Alphas born globally every week. By 2025, they will number almost 2 billion.

Mark McCrindle, perhaps the first to call them “Alphas,” said in a recent interview with the New York Times that as the most technology-supplied generation ever, they have inadvertently been involved in a global experiment where screens are placed in front of them from the youngest of ages for entertainment and education and, while it may be hard to admit, as a pacifier as well.

Digital Learning 2.0: The IoT Explosion and the Rise of AI Tutors

We are living at an inflection point and should expect an exponential evolution going forward. Much like when coal and iron, the general-purpose technologies of the industrial age, were the catalysts of the Industrial Revolution, today, we have mobile broadband, mobility and the cloud. They are passing through the installation phase and will trigger a new golden age and a new economic model.

In one of his many TED talks, Sir Ken Robinson acknowledged that the current education system was designed for a different age and economic circumstance (the Industrial Revolution). Fifteen years ago, if you wanted to listen to music, you had to buy a CD (ownership monetization). Today, all you need is YouTube, Pandora, Spotify or another streaming service (access monetization). In training, we are entering a digital learning era where access enables personalized content on demand.

Fifteen years from now, the highly adaptable, hyperconnected Alpha generation will start joining the workforce. Early studies have shown they don’t care that much about privacy. After all, they were born in a world with social media and where their parents were sharing everything about them since … forever. We have not asked for their permission to do so. They will live in a world after the IoT explosion, where everything will be connected, and everything surrounding you in the physical world will be a natural extension of the online world. In this scenario, presence, not access, is the paradigm.

We may be looking at a world where the departure from the phone is real, where on-demand virtual screens are curated and powered by an “all-seeing eye” (Sauron, anyone?). With access to the information of the anticipated 125 billion connected things by 2030 and a huge database containing information about everything, AI assistants or tutors will give you the answers to questions you haven’t even asked or thought of yet.

“Will robots inherit the earth? Yes, but they’ll be our children” (Marvin Minsky).

By 2045, when all Gen Alphas will be at least 20 years old, Ray Kurzweil writes in “The Singularity Is Near,” artificial intelligence will eclipse biological human intelligence, but humans will also be “artificially” intelligent. Gradually, our biological bodies and brains will be replaced and enhanced by devices.

By that time, when we look back, DNA computers, genetic manipulation, nanotechnology and robotics will characterize the first half of this century, and we will remember smartphones as just a warm-up phase. Kurzweil writes that AI and human intelligence will merge, and humans will become super-smart: The brain will use nanobots to connect to the internet and download whatever information you want to know – just like how Neo “knew” Kung Fu in “The Matrix.”

“Learning proceeds until death and only then does it stop… Its purpose cannot be given up for even a moment. To pursue it is to be human, to give up to be a beast” (Xun Zi).

Kurzweil also entertains the idea that whoever lives beyond 2045 may “live” forever. I will not go that far, but history tells us that the rate of change has been growing exponentially, and the law of accelerating returns is a reality. We know that the greatest triumphs in each stage of development help form the next, and the best technologies are used to develop even better ones. It’s often hard to visualize the technologies of the future; we are stuck with our own paradigms, after all.

We do not know if any of these events will happen. They are predictions, after all. If we indeed go that direction, many are the concerns as technology defines the way we learn.

Bertrand Russel once said, “We are faced with the paradoxical fact that education has become one of the chief obstacles to intelligence and freedom of thought.” We can only hope that education neither loses its sense of moral purpose nor clouds our free will. To quote Confucius, “Learning without thought is labor lost: Thought without learning is perilous.”

Generation Alpha will not be a return to the old but the start of something new. Provided nanobots don’t take over, humanity is in for a remarkable future.

Provided nanobots don’t take over, humanity is in for a remarkable future. 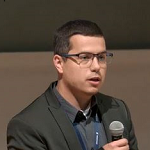 A former 30 under 30 at the Masie Learning Conference, Diogo Julio, SSM, PMPO, is the 5G portfolio development lead for the competence and capability consulting team at Ericsson North America.