The topic of emotional intelligence (EQ) began gaining traction with leadership development practitioners more than 20 years ago, and it has been over 10 years since Daniel Goleman published his first seminal book on the subject. Today, it is accepted wisdom that EQ competencies are a critical component of effective leadership. Billions of dollars along with an enormous amount of time and resources have been spent by businesses across the globe to boost the emotional effectiveness of their leaders. So, at this point we should be seeing significant enhancement of EQ in our leaders, broadly speaking of course.

But there seems to be ample evidence that emotional effectiveness within our leaders — in business, government, non-profits and the military — has in fact not been significantly enhanced in the last 20 years.

Case in point: the 20-year trendline of two surveys — the Corporate Culture Map™ survey by Frontline Learning and the Unlock Engagement survey by Infopro Learning — which both track employee perceptions of leadership authenticity and EQ, indicated that leaders perceive their EQ gradually improving while employees actually perceive a downward trend, outlined in the graph below.

Without going into the details of survey demographics (e.g., reliability, validity, etc.), let’s zoom out and look at the year-over-year trend for two decades. More than 80,000 respondents were surveyed each year, and the directional results tell a clear story: Employees are not perceiving their leaders as having improved EQ. That perception may be right or wrong, but the perception itself is a powerful thing.

So, this begs the question: Why aren’t we seeing more emotional intelligence in our leaders today? Yes, of course there are individual exceptional examples, but looking at the overall leadership landscape from the perspective of employees, why haven’t we seen significant improvement?

I’ve asked this question and had this conversation with many leaders, and I’ve heard many theories, including:

Personally, I think that many leaders tend to work in a communication “bubble” that makes it difficult to develop and sustain a high degree of emotional intelligence.

We all think and communicate within individual “bubbles” that we co-create with those around us. We are not fully transparent with them, and they are not fully transparent with us. With one exception: infants and children are generally transparent in their communication with others up until the age of about three, when they start to learn that adults cannot in fact read their minds. It is a natural and healthy element of human development to learn to consciously limit which of our thoughts we share with others, and how we share them

We all think and communicate within individual “bubbles” that we co-create with those around us.

This isn’t inherently bad, it’s human nature, and to some degree, it’s a necessity. A bubble exists even between those who are closest to you. It may be a thin bubble, but it still exists. If somehow, we all woke up to complete transparency into the minds of everyone around us, and vice versa, one can only imagine the chaos that would ensue.

So, we all have a bubble. Or to be more precise, we all have multiple bubbles, one for each and every human being with whom we interact. And as a leader, it is important to acknowledge that your own communication “bubbles” are natural and have two sources:

The bubble grows whenever a leader has even a modest amount of power over another person. The instinctive reaction is for that subordinate to become a bit more careful around the leader. As a result, they may not share their thoughts and opinions as freely. Or they may express their thoughts in a manner that seems to align with the leader’s expressed thoughts, rather than just say what they really think. In this circumstance, the leader co-creates the bubble by:

The leadership bubble exists at every leadership level, even leaders of small teams experience the leadership bubble. And, of course, the more power one has over the careers of others, the stronger this bubble becomes. As the bubble grows, it can begin to have an increasingly negative impact, both for leaders and their followers.

The longer a leader works within a bubble, the less likely it is that they will perceive things around them accurately or objectively. The danger of being in the leadership bubble is as follows: 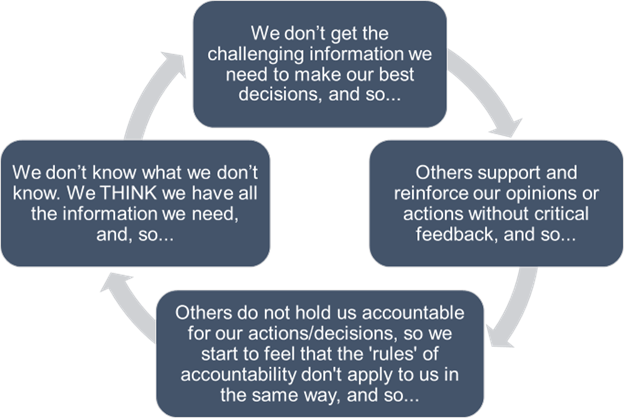 Walt Bettinger, the chief executive officer of Charles Schwab, calls the leadership bubble his job’s “number one challenge.”  He explains that it takes two forms: “People telling you what they think you want to hear, and people being fearful of telling you things they believe you don’t want to hear.”  The danger of being in the leadership bubble is that we don’t know what we don’t know.

Nandan Nilekani, the co-founder of Infosys and recently a senior Indian government official, explains, “If you’re a leader, you can put yourself in a good-news cocoon. Everyone tells you, ‘It’s all right — there’s no problem.’ And the next day, everything’s wrong.’”

The leadership bubble never goes away. But you can work to keep it as thin and small as possible.

If a leader does not work proactively and intentionally to reduce the size of the bubble, that leader can become isolated and blinded. As a result, it puts the organization at greater risk because you don’t get the information you need fast enough from your teams to make strategic decisions. And the bubble makes it more difficult for that leader to develop and sustain real EQ.

Some actually like the leadership bubble. It can feel great to be surrounded by people who validate your profound wisdom. Who lines up to support your amazing strategic plans? Who laughs (just a little too hard) at your jokes and witty bon mots. Some leaders use the bubble to minimize conversations with others – consciously or subconsciously — because they lack the time, patience or mental/emotional energy for all of the human interactions required of their leadership role.

Occasionally you will read about a leader who is obviously intelligent and competent, but still makes basic mistakes. You wonder (like almost everyone else), “How could they be so careless?” And very often, if you know the full story, you find out the leader had worked within a large bubble for so many years that they didn’t perceive the reality of the situation, or didn’t think that the usual rules applied to them, or simply had not been held accountable for so long that they couldn’t imagine there would be a price to pay. The bubble doesn’t make leaders incompetent, but it does often lead them to say or do careless things.

At the other end of the spectrum, some leaders hate the leadership bubble so much that they try too hard to eliminate it. They yearn for authenticity and the emotional bond it creates. They assume that if they are fully transparent, others will do the same, and they may end up oversharing  as a result. Or, they become too dependent on those they believe to be fully authentic with them. They think that this “inner circle” operates without a bubble, because they emotionally need to feel that they can be fully authentic with someone at work. This can lead to over-trust, over-comfort and over-dependence on one’s “inner circle,” and lead to serious errors in judgement.

So, what can you do? Three simple (but often difficult) things:

The leadership bubble never goes away. But you can work to keep it as thin and small as possible. 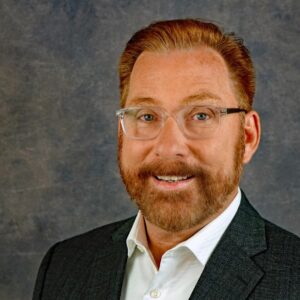 Dan Rust is the head of Infopro Learning leadership development practice. He has more than 30 years of experience as a corporate learning leader, driving employee engagement and leadership development initiatives for numerous businesses including GE, Disney Interactive, Bright Horizons, Singapore Airlines and Kuwait National Petroleum Company. Dan is the bestselling author of “Workplace Poker” (published by HarperCollins) and writes regularly for several publications on the topics of leadership and employee engagement.

Agile Leadership: What It Is, Why It Matters and How to Develop It, Part 2

Mind Tools Partners With HowNow To Help People Perform, Manage, and Lead in the Workplace

Upon Reflection: a Better Way To Train Managers (To Be Better Managers)