Imagine this situation: the vice president of the United States asks you to take an important executive job, but you have limited experience, don’t feel qualified and refuse to take it.

The job? Leading a team of thousands in a $20 billion, decade-long effort to put man on the moon.

That was the situation James Webb faced in 1961 when Vice President Lyndon Johnson asked and finally strong-armed him to take the job of NASA administrator. Webb’s story is one of many about the leaders of America’s moon program told in my new book, “Apollo Leadership Lessons: Powerful Business Insights for Executives.” This article is an adaptation of that story as we mark the 50th anniversary of Apollo 11.

Webb grew up in rural North Carolina, the son of two teachers. He joined the Marine Corps to serve in World War II. After the war, he worked in the North Carolina governor’s office and then moved to Washington to work in finance at the Bureau of the Budget. There was nothing in his experience or education to indicate he could lead a large and unprecedentedly technical organization like NASA.

In 1961, Webb was approached by Vice President Johnson to become the NASA administrator. Webb asked for two weeks to think about it. During that time, he assessed his own strengths and weaknesses and asked for feedback from the people around him — an informal 360-degree assessment.

After his self-reflection, Webb said, “I would not take the job if I could honorably and properly not take it.” Not wanting to tell Johnson directly that he was turning down the job, Webb asked Frank Pace, the CEO of General Dynamics, to talk to Johnson. Webb waited in the anteroom while Pace gave Johnson the news. Pace quickly came out, and Johnson yelled out his office door, “Webb, get in here!”

Forty-five minutes later, he was the new NASA administrator.

Webb had tried to avoid falling victim to the Dunning-Kruger effect. David Dunning and Justin Kruger are psychologists whose research at Cornell found that people are poor judges of their own skills and abilities. That is, there is a general tendency (especially by men) to overestimate one’s own skills. This finding has been confirmed in numerous academic studies, but one story illustrates the point.

Michael Jordan is one of the top basketball players of all time. He was named “Athlete of the Century” by ESPN. But he always wanted to play baseball. After leaving the Chicago Bulls basketball team, he spent two years in the baseball minor leagues before giving up. Jordan had succumbed to the Dunning-Kruger trap by overestimating his abilities.

Webb took great pains to avoid the trap himself by:

To compensate for his shortcomings, Webb created a three-person team to collaborate on all of the big decisions at NASA. The team was made up of his predecessor at NASA, Hugh Dryden, who was a technical genius, and Robert Seamans, the former COO of the Radio Corporation of America, who had the experience running a large organization. Together, the three became known as The Triad.

The Triad was collaborative decision-making at its finest. For seven years, Webb, Dryden and Seamans made joint decisions. Each had his own sphere of excellence and earned nicknames accordingly. Dryden was Dr. Science; Seamans was Mr. Inside, because he understood how organizations run internally; and Webb was Mr. Outside, because he dealt with Congress and the public. Each played to his individual strengths.

The fact that Webb elected to take this approach to managing the organization is a testament to his leadership skills. He knew himself well enough to recognize that he needed to supplement his own abilities, and he created an innovative organizational design to better run NASA.

How to Consistently Play to Your Strengths

Once you have identified your strengths and weaknesses, you can take steps to compensate using four strategies:

Dryden, Seamans and Webb couldn’t have been more different from each other. Their diversity of education, experience and interests provided what Webb called “a whole brain.” We tend to hire people like ourselves. Webb had the awareness to not do that.

Find others equally or better qualified than you to whom you can hand off responsibilities. For example, I hate running meetings, so I regularly ask others to take the lead in my place. I still attend, but I’m not the person driving the agenda. This approach also allows me to be a better listener.

Find others equally or better qualified than you to whom you can hand off responsibilities.

Webb’s decision to share his leadership role with two experts is a perfect example. Look for ways to collaborate. It can reduce your workload and improve the quality of outcomes.

Most successful business leaders understand that they will be much better served by hiring people who are smarter than they are than by hiring “yes people.” Hiring skilled employees isn’t enough; they also need to be a good fit.

Although unorthodox at the time, Webb’s decision to spread decision-making authority across an odd number of leaders was innovative and effective. In forming The Triad, Webb put the most qualified person in each role and ensured that no one individual bore complete responsibility.

James Webb’s decision to spread decision-making authority across an odd number of leaders was innovative and effective. 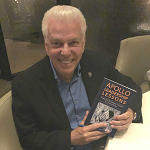 Dick Richardson is the founder and CEO of Experience to Lead, a firm that offers unique, immersive experiences to improve the leadership skills of senior business executives. He is also the author of “Apollo Leadership Lessons” (Authority Publishing), a book that demonstrates how the tactics employed by the moon program’s key decision-makers can be applied in business today, from the front line to the C-suite.

Helping New Managers Shift From Technical Expert to Supervisor in 2021

The Mindset Advantage for Leading Change