None of us actually believes that we are biased. We all believe that we approach every situation clear-sighted and walk away thinking we didn’t lean at all. Unfortunately, we’re all liars. Science – and common sense – has proven time and time again that unconscious bias is always at play. For that reason, combatting bias is of the utmost importance, especially in a world that feels increasingly divided. Hiring consultants to train teams on eliminating bias is a great place to start, but real change won’t happen until there is a transformation at the core of a company’s culture. In short, we need to place more value on empathy.

The Origins of Bias

Bias is evolutionary. Homo sapiens has been living in tribes since the beginning of time, according to biologist E.O. Wilson, “to jockey for power and territory, to demonize the enemy, to organize rallies and raise flags.” Translation: We need to support and be supported by others with a fairly high degree of certainty.

We need to support and be supported by others with a fairly high degree of certainty.

These groups hold a lot of stock in their members’ eyes, because they are the people they identify with, share their fears and triumphs with, and turn to when they need support and encouragement. As a result, group members can view each other in an especially positive way and those outside of the group in an unfairly negative way.

In the early days of tribes, when a stranger would approach the group, the group went on the defensive. Everyone met the stranger at arm’s length with caution and measure, not enthusiasm. They didn’t know if the person was a friend or foe, and they had to be prepared for whatever dangers were potentially coming their way.

Today, we are nicer and more welcoming of strangers, because there isn’t usually a threat of harm or death, yet we still are unsure of people we do not know. Instead of going on the defensive – arming ourselves for battle or sprinting away from the present danger – we mentally and emotionally arm ourselves. We’re friendly but measured, chatty but concise, and warm – but with a chill. In the 21st century, we protect ourselves by putting up our armor of bias.

Many researchers have conducted studies on how difficult it is to identify with someone we view as different. It’s natural, then, to steer clear of those people. When we do have to interact with them, we are cautious, less patient and more likely to be biased. This reaction happens everywhere from within social groups to competing factions of families to interdepartmental disagreements.

These biases are a core component of who we are as humans, but, luckily, there is another core component at play: our need for community. Those same ancestors who viewed outsiders as threats eventually came together to build the precursors of society. They had to change their actions to make that work, but, more importantly, they had to shift their constitutions. They knew that to build something great, they had to revolutionize their thinking and rock their core.

That’s why to combat bias in the workplace, companies must focus on transforming the culture as a whole. Once the root problem is fixed, the symptoms disappear. To push that change, leaders must first change their mindsets. Inserting principles of empathy in core values means that patience and understanding will be at the forefront. There are a couple of actions that will help jumpstart that process.

Inserting principles of empathy in core values means that patience and understanding will be at the forefront.

Listening is one of the hardest yet most undervalued part of any exchange. When we have conversations, most of the time, our goal is to get our point across in a way that we feel represents our views and intellectual capabilities. Once we’ve done that, however, it’s difficult to stay fully engaged.

Make sure you are listening by maintaining eye contact, leaning in a bit toward the person speaking and repeating what they say once they’ve finished talking. Rephrasing what they just said is important not only because you are clarifying you heard them correctly but also because it checks your bias. Often, when we listen to others, we filter their words through our opinion. When you repeat the other person, you are reiterating his or her words while minimizing your assessment of them.

At every possible turn, your office environment must look and feel like both men and women occupy the space. Think of it the same way you think of decorating your first home with your partner. You blend your individual styles together by picking elements each person wants represented in the home, and then you compromise on everything else. Offices should take the same approach.

This strategy extends to the language you use in verbal and written exchanges, including marketing materials. Are women and people of color represented? How do you address a group of people? Do you speak to and about women different than you do men? How about other groups? These questions might seem insignificant, but the nuance of our communication – the mindless things we say a dozen times a day – has an enormous impact on the way we view each other in the office. Being mindful of these identifiers will net some surprising results.

It all comes down to inclusion. Having women and people of color in your marketing materials means nothing if they aren’t represented in your higher ranks. That’s why combatting bias isn’t a simple, three-step process. Yes, there are actions that can help people and teams catch themselves in the moment. No real change will come, however, if there isn’t an overall organizational transformation to be a culture of empathy.

No real change will come if there isn’t an overall culture of empathy. 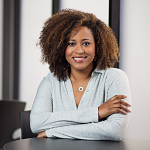 Sharon Steed is an international keynote speaker who revolutionizes the way audiences approach work through empathy. A lifelong stutterer, she uses her speech impediment to teach empathy mindsets.

M&A in Corporate Training: Investments and Acquisitions of the Fourth Quarter of 2021

3 Reasons to Partner with a Training Provider

When To Deploy Coaching vs. Training vs. Consulting