Over 20 years ago, Jack Welch instituted a revolutionary idea at GE: pairing younger employees with older ones — but not for the usual reasons. Rather than having the older, more experienced employees share their knowledge with the newer hires, the goal of Welch’s program was to have the younger workers teach the older ones new skills — specifically, how to use a new thing called the internet.

The program was one of the first to acknowledge that the digital age resulted in a new phenomenon: a generation of employees who had grown up with a new kind of knowledge that older generations had to pick up and learn later in life. And, thus, reverse mentoring was born.

In the decades since, reverse mentoring programs have grown in popularity. As part of my co-authors’ and my research efforts for our upcoming book “Gentelligence: The Revolutionary Approach to Leading an Intergenerational Workforce,” we discovered great examples of how this concept has continued to (slowly) take hold across industries. I applaud the impact of these programs. And now I would like to see them stop.

Let me clarify: It’s not the idea that needs to end. In this era of upskilling and reskilling, all companies should be embracing opportunities for older employees to learn new skills from younger ones. Reverse mentoring programs have been successful in retaining younger talent, increasing diversity and contributing to culture change. It’s the name I have a problem with. Dictionary.com defines “reverse” as “contrary in position, direction, order, or character.”

If something is in reverse, we understand that it is going against the grain and is backward from what’s normal or expected. This definition is my quarrel, and it reveals a much deeper organizational issue than what’s in a name. The belief that it’s unexpected for younger workers to teach older ones signals we are clinging to an archaic notion: that learning normally occurs from old to young. It reinforces that it is, somehow, unusual for younger people to have something to offer or teach those of us who have been around longer than they have.

“Gentelligence” forces us to push back against this kind of assumption. It is the ability to leverage every generation’s potential in the workplace and to see the value of generational diversity of thought to strengthen our organizations. It is the steadfast belief that every generation has something to teach and something to learn from the others. Organizations that can overcome the roadblocks to this mindset stand to benefit from increased innovation; stronger teams; and higher levels of employee engagement, retention and performance (across generations).

As we look ahead to the future of work, there is no longer such a thing as reverse mentoring. In its place, we must establish greater opportunities for mutual mentoring: a multigenerational, intergenerational form of information exchange and learning. Mutual mentoring helps us to acknowledge that different kinds of knowledge exist within our organizations, and they all have value and importance.

Mutual mentoring helps us to acknowledge that different kinds of knowledge exist within our organizations.

We can’t change what we don’t acknowledge, and the reality is that generational and age-based stereotypes are still rampant in our organizations today. For example, our research found that 75% of managers felt younger workers were less reliable than older ones and that older workers were presumed (even by colleagues of a similar age!) to be more resistant to change and less tech-savvy than their younger counterparts.

While few of our generational stereotypes are based in reality (research doesn’t support any of those notions), the perceptions alone can be enough to cause resentment and conflict, making it far less likely that employees will welcome colleagues from other generations as valuable teachers.

Generational tensions in our organizations stem from a sense of competition over resources, opportunities and respect. Historically, if one generation’s insight and experience were seen as valuable for a company, other generations viewed it as a threat to their survival and relevance. This perspective sets up an unproductive “us versus them” dynamic that pits generations against each another; limits our organizational potential; and leads employees across age groups to operate from a place of scarcity, clinging to their own ways of seeing things rather than being open to the mutual benefits of learning new ways of doing things. Instead, we need to help employees of all ages adjust their lens, framing intergenerational teamwork as a proactive opportunity for everyone to gain new skills and perspectives.

When we don’t feel confident that our perspectives and insights will be heard or respected, we are much less likely to share them. This idea is known as psychological safety, and it is the most critical element in creating an effective team.

When we feel judged, disrespected or insignificant, we become defensive. We are unlikely to ask for help when we might need it, as we don’t want to seem vulnerable. However, when others are appreciative of our ideas and seek our feedback, it becomes contagious, leading us to do the same in return.

I recommend beginning with one key question when working to strengthen trust in multigenerational teams: “How would you approach this situation?” Asking for the advice of a colleague who is younger or older signals that you value his or her perspective and inevitably leads to unexpected learning. That question also makes it much more likely that your colleague will hear and appreciate any feedback you may have.

We need to move a focus on intergenerational learning to the center of our training and development conversations. With five generations working together every day, the stage is set to foster such opportunities. Using the wide range of diverse knowledge already present in our teams and organizations, we can facilitate ongoing internal opportunities for upskilling. This approach helps all employees learn from each other and share their unique knowledge and expertise. Research has shown that intergenerational learning results in strengthened relationships among employees of different generations as well as increased team cohesion and inclusion.

Let’s put an end to the term “reverse mentoring.” All mentoring is an opportunity for mutual mentoring, where the perspective and diversity of thought that comes with growing up and building one’s career in a different time is recognized and acknowledged as valuable. It’s time for a more Gentelligent approach to growth and development.

Editor’s note: Don’t miss our infographic “Creating a Social Learning Culture in the Modern Workplace,” which shares insights from learning leaders like this one.

It’s time for a more Gentelligent approach to growth and development. 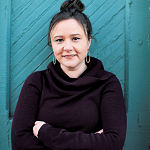 Megan W. Gerhardt, Ph.D., is a speaker, consultant and professor of management at the Farmer School of Business at Miami University. She teaches in the areas of leadership and change, and her research focuses on the importance of individual differences at work. Her upcoming book “Gentelligence: The Revolutionary Approach to Leading an Intergenerational Workforce” shares how organizations can apply best practices in diversity and cross-cultural management to overcome generational conflict and create competitive advantage.