In our 20+ years of working with many of the largest companies across all industries around the world, we have found several leadership blind spots – areas where existing beliefs and experiences preclude us from having the most enlightened view of how to lead most effectively. Those blind spots cloud how we lead and run organizations. They are as absurd as societal blind spots like bloodletting, cocaine toothache drops, healthy smoking habits and carbonated soft drinks mixed with milk.

We aren’t aware yet of how flawed our thinking is when it comes to our leadership. Several years from now, we will look back at how we run organizations today and shake our heads at how unenlightened some of our practices and beliefs were.

In 1990, psychologist Elizabeth Newton conducted an experiment at Stanford. She gave one set of people, whom she called “tappers,” a list of common songs. Their task was to rap their knuckles on a tabletop to the rhythm of the chosen tune as they thought about it in their heads. A second group, called “listeners,” were asked to name the songs.

Before the experiment, tappers predicted that listeners would be able to identify about half the songs, but listeners only got three out of 120 songs correct – 2.5 percent. The tappers were astounded. Each song was so clear in their minds. They wondered how it was possible that the listeners couldn’t “hear” it in their taps.

Business leaders and experts sometimes experience a similar reaction when they share their ideas. So many leaders struggle to engage people because their story makes sense in their own head, but to everyone else, it is confusing, boring and largely irrelevant. Most of the stories that leaders create lack cohesiveness, clarity, drama and a sense of what is possible.

Most of the stories that leaders create lack cohesiveness, clarity, drama and a sense of what is possible.

Typically, leaders are excited to share a new strategy, initiative or way of thinking and often feel they’re doing a great job, while in reality, listening to them is like watching a foreign film with subtitles. What’s worse is that most leaders think that they are effective and that they have a hit on their hands, while the opposite tends to be true in the eyes of their employees.

We have worked with many executive teams, and it is not unusual to see eye rolls when we talk about storytelling. It is often perceived as a soft topic, despite its importance. Connecting your strategy, initiatives and decisions meaningfully to hundreds or thousands of employees is crucial to success.

Connecting your strategy, initiatives and decisions meaningfully to hundreds or thousands of employees is crucial to success.

The truth is that to reach the heart, you must create a sense of adventure and belonging while also outlining a meaningful journey where people can see how their contributions make a difference. Jerome Bruner, a Harvard psychology professor, made the point that our Western scientific worldview is largely concerned with facts and truths, and we fail to use storytelling to give those facts and truth meaning. You need both to be effective, but most organizations only focus on one. The way organizations typically create and share their story does not create meaning, and it doesn’t help people to care about or connect with those stories.

Here are some questions organizations can ask to assess their storytelling strengths:

Finally, as a learning and development leader: When you and your organization are developing programs for your people, are you creating compelling stories that will inspire and motivate them to change?

When you are developing programs, are you creating compelling stories that will inspire and motivate them to change? 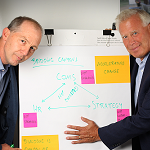 Jim Haudan and Rich Berens are chairman and CEO of Root Inc., an organizational change leader, and the authors of “What Are Your Blind Spots? Conquering the 5 Misconceptions That Hold Leaders Back.”