Influential communication skills aren’t easy. If they were, everyone would command attention, respect and the ability to influence others to act upon what they had to say. Unfortunately, that’s not the reality. Poor communication skills run rampant throughout companies, costing time and productivity and resulting in lost man-hours.

Rarely do leaders see themselves as the culprit. While the tone comes from the top, few leaders believe that improving their communication skills will result in a more effective organization. They fail to differentiate communication from influential communication.

In an Interact/Harris poll, 91% of employees said “communication issues can drag executives down.” Employees see the effects of ineffective communication, but many executives won’t admit that they’re guilty. Many of the C-suite and executive-level professionals I’ve worked with attempt to excuse their mistakes with one of these five excuses.

Excuse #1: “Communicating comes naturally to me. I’ve been doing it my entire life.”

Most people think that since they have communicated their whole lives, they must be good at it. However, communicating is different than influential communication. Delegating direction, sending emails, text messaging or interjecting in meetings is not considered communicating with influence.

Communicating is different than influential communication.

The secret is learning to communicate clearly and concisely so the communication makes an impact on everyone who hears it. Earning respect, credibility and trust only comes when leaders communicate this way consistently — every day, in every interaction, Monday to Monday. When leaders become effective at influential communication, miscommunication decreases, while productivity increases. No longer are countless meetings required to gain understanding or clarification.

Excuse #2: “Employees don’t need to know I’m seeking coaching. I will appear vulnerable, and it could jeopardize my influence.”

Many executives think they must keep their need for self-improvement a secret. They fear that if employees know, they will have a different opinion of them. The opposite is true.

Many executives think they must keep their need for self-improvement a secret.

Employees don’t think their leaders are perfect, so why pretend? Leaders need to show their willingness to improve. As a result, they’ll earn more credibility and influence.

Excuse #3: “I’m successful because my communication skills are already good. It’s why I have my title.”

Communication skills may be the reason an executive has reached this level professionally, but it may also be the reason he or she has stopped progressing. Leaders are promoted and earn more significant opportunities when their teams deliver. Teams deliver when they respect their leader and act on what they have to say. It only occurs when the leader is influential in his or her day-to-day interactions.

When companies want to promote leaders from positions of vice president to president, from president to the C-suite or from the C-suite to the board of directors, they assume that person has the skills required to take on the role. They often delay a promotion until they see the leader make an effort to improve.

Excuse #4: “Someone in my position doesn’t need coaching. My organization, however, could benefit from it.”

Imagine if athletic icons used this excuse. How successful would Michael Jordan’s basketball career had been if he’d thought he didn’t need to be coached? Would the Chicago Bulls have won as many titles if their most influential player refused the coaching necessary for the team?

Coaching is no different for a business leader than a professional athlete. Its purpose is for the leader to improve. If leaders want their employees to become better, they must commit to becoming better first.

Leaders rarely admit that their organization’s inability to communicate stems directly from them. No matter how much talent, knowledge or ability leaders have, if they don’t experience continual improvement, they will fail.

No matter how much talent, knowledge or ability leaders have, if they don’t experience continual improvement, they will fail.

Excuse #5: “I’m so busy. It’s hard to find the time to practice the skills you recommend.”

If someone wants to be better, they don’t “find the time” for practice. Instead, they  integrate it into their day-to-day communication and throughout every interaction. It requires mindfulness and a commitment to making a concerted effort to understand where they need improvement. When leaders begin to understand where there are opportunities for improvement, they can immediately implement new skills in every interaction, from high-stakes meetings to casual hallway chats.

In the Interact/Harris poll, 57% of employees reported that their executives didn’t communicate clearly. Imagine the time leaders could save if they made a concerted effort to improve. No more extra-long meetings to clarify priorities, goals and messages. No more phone calls to clarify emails or emails to clarify meetings. Better still, the entire organization’s productivity improves as employees work with clarity and purpose.

Organizations do what their leaders do. They place the same value on communication skills as their leaders. If leaders want everyone to listen to their message, they must become an intentional listener. If they wish employees would communicate more clearly, they must be clear in their own exchanges. If they want to see productivity climb, they must make every interaction count. In other words, executives must stop the excuses and start seeking the improvements needed to master their communication skills.

Organizations place the same value on communication skills as their leaders. 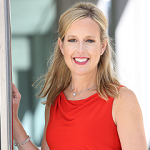 Stacey Hanke is a communication expert, the founder of Stacey Hanke Inc., and the author of two books: “Influence Redefined … Be The Leader You Were Meant To Be Monday to Monday®” and “Yes You Can! Everything You Need from A to Z to Influence Others to Take Action.” Stacey and her team have delivered thousands of presentations and workshops for leaders of Fortune 500 Companies, including Coca-Cola, Nationwide, FedEx, Kohl’s and Abbvie.