Presence is quite the buzzword in business these days. Most job descriptions for mid- to senior-level leaders list presence as a must-have. If you feel you lack it, there are dozens of books and videos that will tell you how to get it.

No doubt many leaders can benefit from a more confident manner. But as professionals charged with leadership development, should you be concerned primarily with presence … or substance? As you look around your own organizations, most of us would agree that presence is all very well, but substance, or character, is the real must-have, for individual leaders and companies alike.

Character isn’t just about ethics; it’s about effectiveness. Talking a good game only takes leaders so far. A brilliant strategy comes to nothing if you can’t execute it, working with others. And execution requires, above all, strength of character.

How should organizations address leadership character? The typical organization tries to do so by creating a set of “corporate values” and telling employees to embrace them. This approach is totally inadequate. Consider Enron, Lehman Brothers, and Union Carbide—infamous for spectacular collapses linked to their leaders’ lack of character. These companies all had lists of values that included phrases such as Integrity in All We Do or Caring for Our Employees. Clearly, those lists didn’t do much to shape leaders’ behavior.

Not to say corporate values are worthless, but it’s key to go well beyond list-making.

As a start, discuss character in your leadership programs. Give leaders a chance to reflect on moments of truth and apply values to actual work dilemmas. Furthermore, leaders need specific advice on what constitutes leadership character: what it looks like, what it doesn’t look like, how it benefits them and those they lead, and how to develop it. 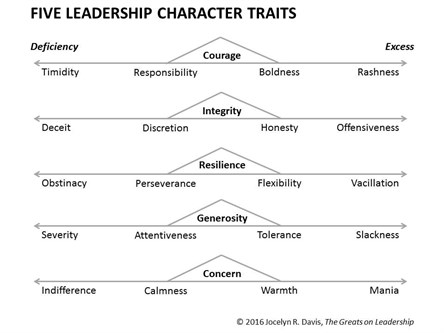 Following the great Greek philosopher Aristotle, each trait is at the midpoint of a continuum. Each midpoint is the “mean” between two extremes, one of which is a deficiency of the trait and the other an excess.

As you can see in the diagram above, courage is the mean of timidity (too little) and rashness (too much). Integrity is the mean of deceit and offensiveness; resilience, of obstinacy and vacillation; generosity, of severity and slackness; and concern, of indifference and mania. At each extreme you find leadership behaviors that are at best unproductive; at worst, evil.

Nearer the center of each continuum, sitting on either side of the mean, are two other traits called the near-means. It’s difficult to hit the exact midpoint of the line, so most of us tend to lean toward one side or the other. In the case of the courage continuum, for example, some of us lean toward responsibility, which is a slightly tepid form of courage but is obviously a good thing most of the time. Others lean toward boldness, which is a slightly overdone form of courage but, again, often helpful.

But a perfectly courageous person would integrate responsibility and boldness, striking the perfect balance every time. In the same way, each of the other four character traits represents an integration of two near-means, uniting the best of each. Integrity unites discretion and honesty; resilience unites perseverance and flexibility; generosity unites attentiveness and tolerance; and concern unites calmness and warmth.

In their decisions, actions and manner, the very best leaders manage to mold both sides and hit the mean spot-on—at least, most of the time! This is what good character looks like.

Leaders have a tough job. In training programs, they are hungry to talk not just about tips and tactics, but about moral dilemmas and personal challenges. The Five Traits framework can help us move beyond superficial talk of “presence” and “values” and open up a dialogue about the real stuff:  character.

The Five Traits framework can help us move beyond superficial talk and open up a dialogue about character.

Jocelyn Davis is an international leadership consultant and author. Learn more about the eight leadership traps and how to avoid them in her latest book, “The Greats on Leadership: Classic Wisdom for Modern Managers.”