In a world of algorithms, screen time and video training, we’re quickly losing our grasp on soft skills. We’re increasingly becoming a society who is unable to self-evaluate. In fact, we’re so out of touch with ourselves that we don’t even have a word for self-evaluation. Without an understanding of our own behaviors and their results, how do we grow our soft skills? How do we maintain an awareness of our own strengths and weaknesses, as well as how they shift, when we have no means of measuring them?

Assessments bring awareness to leaders’ behaviors and tendencies. In other words, they create self-evaluation. As facilitators work through the assessments with learners, they witness a series of lightbulb “Aha!” moments as, one after another, they recognize themselves in their assessments and then begin to realize the impact their behavior can have on their staff.

Here’s an example: If a leader’s tendency is to be direct and to the point, but his or her employees want to know the details and “whys” behind the details, the leader’s message could be lost. Through self-evaluation, leaders can understand their own traits and change how they interact with others, which in turn facilitates better soft skills. As Lau Tzu once said, “Intelligent people know others. Enlightened people know themselves.”

Understanding is only the first step. Once people are aware of the behaviors that prevent them from being great leaders, they can get to work. Much like creating a new workout program or diet plan, they have to create tangible steps for soft skills growth.

For example, take listening, one of the most sought-after soft skills. Effective listening allows leaders to cultivate trust with their staff, understand different perspectives and move projects forward. Yet many leaders say that skill is one of their weakest. So, how do leaders develop listening skills?

Leaders have to recognize when they are not listening. What is happening to them physically and mentally? Once they identify their personal hallmarks of poor listening (maybe it’s bad posture or having their phone in their hand), they can begin to intentionally avoid those behaviors.

For example, Jill, the manager of a large running store, wanted to work on listening. After she considered her behavior, she realized that she tends to only hear the first idea her staff members present before she launches into planning mode –  completely missing everything else her employees say.

First thing’s first: Help leaders identify when, why and how they’re creating the moment they want to change.

Help leaders identify when, why and how they’re creating the moment they want to change.

Once leaders understand the negative behavior and what it looks like, they can begin to create a new regimen with a revised approach. Have them write down this new regimen, just like they would for a new diet plan.

Jill identified three new actions she wanted to take to create a better way to listen to her staff:

Changing soft skills is a process in self-governance. Leaders have to become their own boss. Have them set milestones; write down when they experience success, particularly regarding becoming aware that they are repeating a bad habit; and record their results. This process will help them become more familiar with the behavior and its ensuing outcomes. These new habits need to be practiced for at least for 21 days, if not more.

Changing soft skills is a process in self-governance.

Jill began to notice how much more her staff was talking to her about their ideas. They were more genuine and vulnerable with her. Jill also realized how much fun it was to truly listen to everyone. Overall, we’d call that a huge success!

Because working on soft skills is so challenging, and the payoff can seem minimal, it’s important for leaders to seek out self-satisfaction in their growth. How are they going to reward themselves after the 21 days of practice? Make sure it’s meaningful. Jill rewarded herself with a framed quote that reminded her of her “why” for wanting to work on herself and be a better leader.

There are no algorithms to help people grow their soft skills to then grow into successful leaders. It’s an internal job that requires a skill with no definition. The rewards, however are worth the effort.

There are no algorithms to help people grow their soft skills to then grow into successful leaders. 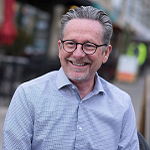 Dan Mann is the president of The Mann Group, a consulting firm that trains B2B and B2C businesses to connect effectively with their customers. He is also an expert in adult behavioral change and the author of “ORBiT: The Art and Science of Influence.”