2020 is, without argument, a year of change on many fronts. In terms of equity, people and employers have a renewed energy to recognize and push for diversity, understanding and action. But how do teams and companies go beyond the “diversity statement” and make real, meaningful changes?

This awakening feels historic and transformational, but the workplace is tempered with unconscious bias — people’s preconceptions based on race, gender, religion, disability, sexual orientation, age, or a myriad of other demographic and individual characteristics. Unconscious, or implicit, bias is insidious because many people and organizations don’t realize it’s happening. Someone may be a fervent believer in workplace equity but unknowingly make decisions from a place of bias that ultimately stifles diversity.

Plus, unconscious bias isn’t obvious. It occurs subtly but can build upon itself, creating a sense of discord and a lack of community within an organization. Some examples of actions that seem innocent but could be unintentionally biased include:

Unless people can identify bias behind decisions and insensitivity behind words and actions, our workplaces won’t improve. Fortunately, training can help overcome the effects of unconscious bias and foster better diversity and inclusion. Employees who take a moment to consider the implications of their words and actions can make a significant difference.

Everyone brings unconscious bias to everything they do — even people who claim to have no biases — because the human brain is designed to make decisions as quickly as possible. If, for example, you come across a piece of rope on the ground during the day, your past experiences and biases will likely enable you to identify it as a rope and, therefore, not a threat. In poor light, however, you may initially think that same piece of rope is a snake, requiring your brain to take a moment to assess the situation before walking past it.

This instinctive process contributes to humans’ cognitive efficiency: We react to what we see and hear around us, as well as our collective experiences and value systems. However, this process also contributes to unconscious bias — our brains switch to autopilot (i.e., “It’s a snake!”), unaware of the underlying ramifications of our decisions.

Although explicit bias still exists in the workplace, many organizations are actively working to raise awareness of bias and inequity. However, unconscious bias continues to interfere with that goal. For example, a 2017 study found that white applicants receive 36% more callbacks for a job than Black applicants and 24% more callbacks than Latino or Latina applicants. A name that sounds “non-white” on a resume may trigger an unconscious bias that the candidate is less qualified. In our global, interconnected world, this autopilot mode prevents people from recognizing the positives that others bring to the table. And, worse: We don’t know what we’re missing.

Training processes can also suffer from unconscious bias. The content itself might be inadvertently unbalanced, and the training might not adequately teach employees how to apply an unbiased approach to everything they do on the job.

Employees who take a moment to consider the implications of their words and actions can make a significant difference.

On the other hand, organizations grow when they have a diversity of people, and there’s a solid business case that training people to recognize and overcome unconscious bias improves the bottom line — besides simply being the right thing to do. Organizations should approach such training in three steps:

Training to overcome unconscious bias is a challenge, because many managers and leaders haven’t thought about these topics over the years. Historically, we have perceived the workplace as a place where we turn off our personality and just work. As a result, many people haven’t developed the emotional intelligence and skills to effectively engage in these conversations.

Perhaps the worst thing a company can do right now with its anti-bias training is lecture employees. Declaring that unconscious bias is bad, providing a little information and then quizzing learners won’t produce any long-lasting effects.

Moreover, trying to upend employees’ value systems will backfire as well. Your leaders’ beliefs might be different from what individual workers believe — and that’s generally OK. It’s important to clarify that you’re not trying to change people. You’ll experience a lot of resistance if you come out saying, “In order to work at our company, your beliefs have to exactly match ours.” That philosophy is actually counter to diversity.

Be clear and careful in these conversations, laying out a commitment to diversity and multiple views but also being specific about behavioral expectations while employees are at work and interacting with colleagues. It’s important to make that distinction to avoid attacking people’s belief systems and personal experiences. Educating employees about standards of conduct that they are expected to follow is a more realistic, impactful and achievable goal.

The most successful unconscious bias training invites employees to examine their own bias. To understand this approach, imagine boarding an airplane and seeing a pilot greet a couple in front of you. Do you picture a white, male pilot and a heterosexual couple? It’s OK if you do — but that assumption is an unconscious bias that scenario-based training can help you recognize.

A Moment Before Action

Effectively tackling bias requires a filter. Our brains have three stages of action: something we think, something we say and something we do. All three happen quickly, leading to our instant responses. Effective unconscious bias training teaches employees ways to add a pause between thought and action in order to consider how a decision might be laced with unconscious bias. For example, when you hear or say something, is there a language bias that alienates, even unintentionally, certain ethnicities?

Admittedly, this pause is difficult, because humans are so instinctive. But that extra split second of reflection is gold — it’s when the brain kicks in and turns off autopilot. Behavior-based training creates a cheat sheet for employees of what they should ask themselves in any workplace situation. Again, good training isn’t forcing people to change their beliefs; doing so is counter to diversity goals. Rather, good training encourages people to change their behavior.

We’re all in this journey toward equity and diversity together, but it’s a journey each person must take individually. Great training gives employees the tools to understand unconscious bias and apply that understanding to the standards of conduct your organization sets forth. (And, it helps make your company a better place to work!) 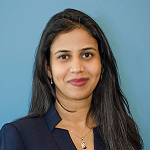 As chief executive officer of True Office Learning, Neha Gupta is responsible for its product and technology vision, strategy and growth. Prior to her role as CEO, Neha served as senior director of learning solutions and strategic initiatives at New York Stock Exchange Governance Services and as Citigroup’s chief of staff for the Institutional Clients Group Technology organization.