Data-driven stories can seem magical, giving professionals a superpower of persuasion, and training employees on how to create such content can be a daunting task. There are lots of hurdles to overcome, including dealing with data that’s out of date, becoming lost in mounds of statistics or being forced into such mind-numbing chores as manually pulling data into spreadsheets. It can make almost anyone nostalgic for the good old days of working with just a pencil and paper.

Fortunately, there are tricks and tools to make the storytelling process less agonizing. Here’s some advice from Boston University’s storytelling workshops to help you train employees in data-driven story techniques.

Employees may think they need only one set of data to tell their stories, but extra data often provides a richer understanding of a topic. There may be data they can use for benchmarking purposes or that will add an unexpected dimension to the story. Since we don’t know what we don’t know, urge learners to spend time searching for data – especially in this era where new data sets pop up almost every day.

Employees may think they need only one set of data to tell their stories, but extra data often provides a richer understanding.

Where to hunt for more data? Learners should look for specific websites that might be most relevant to their work. Make sure they know how to use advanced searches on Google, limiting queries to specific sites with the “site:” filter. They can also experiment with the beta “Google Data Set” search, where users can plug in a topic to search for data.

Once employees find the data they want, they’ll need to collect and organize it. To simplify what could be a tedious or aggravating process, consider teaching them how to use tools that extract data from PDFs or PDFs to different file formats for easy analysis. Do they need to pull together data from multiple spreadsheets? There’s a tool for that, too: VLookup, a versatile function in Excel that allows you to retrieve data from a table.

To make sure that their data set is accurate and not filled with duplicate entries, it’s essential that employees learn to clean their data. Train them on how to use tools that standardize data and how to create a data diary. It may take time for professionals to record every single step they take to locate and manipulate their data, but if they ever need to figure out whether they’ve inserted errors in their data set, the diary can be invaluable.

When analyzing data, employees must keep in mind their end goal: a data-driven story. Whether writing an article or a preparing a presentation, they should look at the data first to identify their key points by combining and comparing data sets and searching for patterns. It’s easy to make pivot tables in a spreadsheet and spot outliers. Only after they identify trends should they start doing deep dives into the data to look for interesting nuances.

Often, it’s helpful to act like a reporter and “interview” the data by creating a series of questions and seeing if the data can answer them. Now is the time employees can consider how extra data sets could enhance their analysis. When journalists at the Providence Journal wondered years ago why students were being injured in bus accidents, they didn’t just obtain a list of school bus accidents; they also retrieved lists of all school bus drivers, all drivers’ license violations and all felons in the state. When they were finished comparing and contrasting these lists, they discovered multiple school bus drivers who had been involved in more than 20 accidents during a three-year period as well as many who were drug dealers and convicted felons.

Often, it’s helpful to “interview” the data by creating a series of questions and seeing if the data can answer them.

Help learners change their behavior when it comes to creating the story itself – in fact, they should reverse course completely. Until now, they’ve learned to be in a kind of spendthrift mode, going on sweeping sprees to find and collect reams of data and then analyzing what they’ve found in as many ways possible. Now, it’s time for them to act like misers, hoarding most of the information and showing only what’s absolutely necessary. Their average audience doesn’t want to know all the gory details. They don’t want to slog through reams of charts and graphs.

Your employees may not want to believe this. Their first impulse will be to show everyone all the work they’ve done and all the interesting information they’ve discovered. But this is the time for self-restraint. After making sure their data are accurate, their top goal is not to lose the audience. They’ve done great work, so they can’t let people ignore it.

Teach your students to convey their ideas simply and in engaging ways. They’ll need to do the hard work of figuring out what matters most. Don’t let them skip this process, even if it takes some time. Remember Mark Twain’s famous quip, “I didn’t have time to write a short letter, so I wrote a long one instead.”

Employees should consider telling their story in a narrative form, complete with a beginning, middle and end. They might want to start with the business problem, then take their audiences on a journey about people’s efforts to tackle the problem and finally end with how they can resolve the problem. As they tell their tales, they should think of ways to engage their audience’s emotions and make sure they cut out any clutter – in both writing and data visualizations. Clutter can only distract, confuse and, ultimately, bore the audience.

With data visualizations, teach them to simplify their data and put them in an understandable context. Urge them to avoid pie charts, which often create confusion. Instead, they should rely on simpler bar charts and graphs. If they need to show geographical detail, they could try a tool that enables the display of map data. To show changes over many years, they could consider timelines. Once they master the basics, they can think about adding some “wow” factors, like interactive visualizations, or making charts with multiple layers, which allow people to drill down into a graphic to learn more details about a project.

Putting together such stories may seem daunting at first. But by following some simple steps, your learners can reach their happy ending: a compelling story that persuades.

By following some simple steps, your learners can reach their happy ending: a compelling story that persuades. 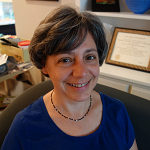 4 Practical Approaches to Develop the Human Skills That Drive Performance